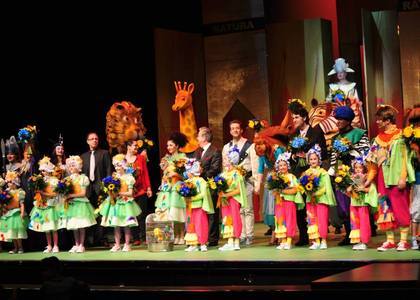 Monday, 27 April 2015 , ora 10.20
Seeing a hall full of children watching an opera performance is the best sign that the music created with professionalism and dedication is not only a necessary element, but also essential for the education of the little ones. Actually, I convinced myself once more of this, on Friday, 24th April, 2015, at the first performance of the Magic Flute by Wolfgang Amadeus Mozart, which took place at the Comic Opera for Children.

Adapted for the little ones, reduced to one hour and sung in Romanian, the performing style suggested by the singers of the institution, managed to captivate the ones who, after the performance, were humming and pronouncing names, such as, Papageno, Pamina or the Queen of the Night, with enthusiasm.

"I liked Papageno the most. He was continuously improvising. I liked the performance a lot."

"It was wonderful. It made me dream this evening and to be honest, I would watch it several times without getting tired of it. "

After the performance, the stage director, Cristian Mihailescu said the following:

When an event is near, you can't always have the best impressions, but considering the reaction of the audience, their remarks and appreciation, I have realized that it is a success. First and foremost, the subject is very important as well as the triumph of Mozart's music, a music which shapes souls and develops personalities. The Magic Flute can be seen as a beautiful but instructive story, exactly as I intended my performance to be. It is the most complex performance presented on the stage of the Comic Opera for Children, from a technical point of view. The reaction of the youngsters enables me to think that it is a success.

Obviously, without forgetting the artistic quality of these performances, which have gradually become more complete and complex, the Comic Opera for Children meets its goal and why not, the impossible mission of offering children an alternative to the dozens of harmful elements they face everyday. And the results don't take too long in showing up, because most of the performances of this institution have been played with all the tickets sold out for some time.

The Comic Opera for Children, the place in which children's favourite characters come to life and sing, keeps alive a world of stories that are so welcomed in the present social context.