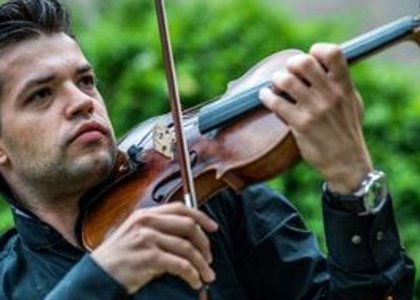 George Tudorache, a Semi-finalist in the 'Queen Elizabeth Competition' in Brussels

Tuesday, 12 May 2015 , ora 10.20
The violinist George Tudorache is one of the 24 semi-finalists in the Queen Elizabeth Competition, a competition which began on Monday, 4th May, 2015, in Brussels. The 27 year old musician is a disciple of maestro Ștefan Gheorghiu and he graduated from the Conservatory in Paris; he is now one of the two concertmasters of The Orchestre Philharmonique Royal de Liège. On Saturday, 9th May, George Tudorache performed with other 62 cadidates, in front of a jury where Mihaela Martin was also a member, interpreting selections from the Violin Sonata No.1 in G minor, BWV 1001 by Johann Sebastian Bach, The Violin Sonata Grand Duo in A major (accompanied by Thomas Hoppe) by Franz Schubert and Caprice Op 1, No 5 in A minor by Niccolo Paganini. George Tudorache started playing Bach calmly, almost sad at times, with a legato rhythm, but he stressed very well the thematic moments of part II. Next he played a truly romantic Schubert, even though he played in a low key, and Paganini's Caprice in which he proved that he interpreted with good technique and expressivity.

Because Queen Elizabeth Competition is open to the public, George Tudorache played not only for the members of the jury, but also for many music lovers who came to Flagey Hall - amongst them being also an honourable lady who has been coming for 37 years to listen to the young musicians in the competition and who told me, as she knew I was Romanian: "Your compatriot is a natural at playing the violin and he plays Paganini perfectly!".

In the semifinal of the Queen Elizabeth Competition, George Tudorache will play on Wednesday, 13th May, 2015, starting at 21:00. You can watch his performance live online, on http://www.concours-reine-elisabeth.be/.