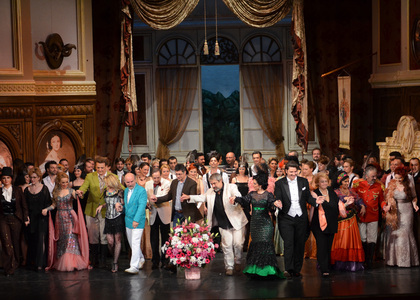 Tuesday, 19 May 2015 , ora 9.48
The comic opera has always been one of the genres that the people of Banat have loved, maybe because the spirit of the dances and songs found in Strauss' or Lehar's scores have been familiar to them; and perhaps it was not a coincidence that another famous composer - Emmerich Kalman - chose that the main heroine, Silvia, be a young girl from those places - Silvia Verescu.

An extra reason due to which, in the former season, the Timișoara Opera suggested a new staging of the famous work and due to which now, after more than two decades, Countess Maritza by the same composer, staged by the same director - Gyorgy Korcsmaros from Hungary - collaborating again with Eva Horvath (also from the neighbouring country) for the creation of the set and with Amalia Judea (from Oradea) for the designing of the costumes, is on the playbill of this Opera House.

This time again, the vision is classical, the first part taking place in the manor's courtyard, and the second in the milieu created by the elegant 'country' building, using the front steps to provide perspective and depth, outlined either by columns and an exterior wall on the left and trees and a bench on the right, or the mirrors on the walls, the paintings, the fixtures and the fireplace bar; the only props item being, on the inside, a couch skillfully turned around by the artists; and in the background, a blue sky, with only a couple of clouds that may suggest, symbolically, the passing shadows that linger over the relationships between the main characters. The multicoloured costumes offer an amalgamated diversity, from the gorgeous evening gowns to the Gitano-themed; or from the folk-inspired costumes to the extravagant cabaret costumes; or with those that funnily characterize the male 'composition' characters, properly and inventively thought.

The soloistic team was pretty much the same, like an extension-continuation-completion of the love stories that were visibly marked, in both 'histories' by sadness, indignation, resignation, hope and romantic dreams in the case of the main couple and overwhelming joy in the case of the Lisa-Zsupan couple, designed to ensure the contrast that is mandatory for the plot of a great comic operetta. Usually young and pretty as ideal prototypes for every character, the performers were believable, sketching their heroes with charm and personality; this way, soprano Narcisa Brumar became a charming Maritza, beautiful, rakish, slightly spoiled and whimsical, but delicate and warm, her voice having, as usual, a special expressive load, even if the rather invidious writing, requiring the medium-grave register, caused a slightly dim penetration, like in the case of the tenor Bogdan Roman (Zahariea), whose appearance of male ingenue is an advantage in itself, managing an adequate move to Count Tassilo, but vocally speaking, he was far from the impressive impact he once made, having often been covered by the large orchestra.

A bright and homely Lisa, mezzosoprano Gabriela Varvari managed to undergo a score that is usually tackled by sopranos, and her partner was Cristian Rudic, unbeatable in roles with a comical hue, making Baron Zsupan the climax of the general amusement, even if his first entrance, with a retarded fall as well as several 'ongoing' reactions were a bit 'exaggerated', going out of the shallow but homely character, ending with his dance and that of the four attendants in the final scene (their aspect being somewhere between Fred Flintstone and the red-skins), with a hue of cabaret, but also bringing the easy-sentimental side in his relationship with Lisa.

For his part, baritone Dan Patacă sketched a humorous Ioța, matching Zsupan but also his former-next wife, Bozena, who had her extravagant side outlined by Gabriela Toader through attitudes and a clear-airy performance, with temper and irony, dressed in an eccentric period costume, stressing her array and motions. On another level, soprano Nicoleta Colceiar was, in Manja, a Gipsy-witch who was rather smiling and joyful, accurately and carefully singing, intermingling with choir and the dancers surrounding her.

In other roles, Loredana Borlovan (Ilka), Gelu Dobrea (Karl), Mugurel Chirilă (Cekko) and Cosmin Borlovan (Berko), were just as convincing, already having the experience of this kind of episodic entrances that are very important to the plot. The whole cast excelled in their vocal talent, their prose reading, their dancing and acting, building a unitary show, even if the nervousness of the premiere caused small rhythm breaks in the dialogues; but, overall, the show had flow, logic and nerve, marking the sensitive moments characterized by a huge sentimental load and matching reactions.

The director wanted the choral ensemble to be amassed, especially during the first part, on the stairs, looking similar to a vocal group performing in a competition on stage, for it to gain an increased mobility in the manor scenes, singing homogenously and with a high-quality sound (trained, as usual, by Laura Mare); regarding choreography, I had expected Gabor Bako (Hungary) to create more incisive and less elegant Gitano dances but the cabaret ones were shimmering sequences, rightfully appreciated by the audience.

On the other hand, Korcsmaros came up with the idea of having several guests or employees of the manor wander around the stage during the overture, surrounding child-, then teenager-Maritza, probably leaving for Vienna, from where she would return for the story to begin. Also, the cheerful young ladies, with tennis rackets, courting Zsapan, created a good opportunity for 'society games' that abound in the text book, along with other director-related formulas that have some cachet for the audience.

The orchestra faced a complex and demanding score, standing out through the graceful and rich coloratura, through the small details and especially through the manner in which it 'felt ' the spirit of Kalman's comic opera in the way in which the conductor Peter Oschanitzky once more proved, not only by vigor and by discretely and efficiently solving the slight desynchronizations in the stage relationships, but also by a nuanced gesticulation, suggestive for emphasizing some accents and rhythm-melody combinations, essentially made for showing the work's true worth highlighting the musical endeavour of Kalman's creation, which is so hard to interpret.

And the fact that - during the first evening, it all sounded captivating and the applauses and reactions of the audience that had invaded the hall burst out spontaneously and enthusiastically, rewarding the masterful performance, cheering for all who contributed to the 'uprising' of the production - was the best proof that the return of Countess Maritza in the repertoire of Timișoara's lyrical theatre was expected and desired by music lovers, thrilled to once again listen to their favourite songs and to (re) watch their beloved heroes embodied by their favourite artists. In the foyer, I only heard superlatives and thanks addressed to the director Corneliu Murgu for the inspired idea of setting up that comic operetta and for the high level at which it was produced. And, after all, the appreciation of the audience is the best and most important and a real barometer of success.