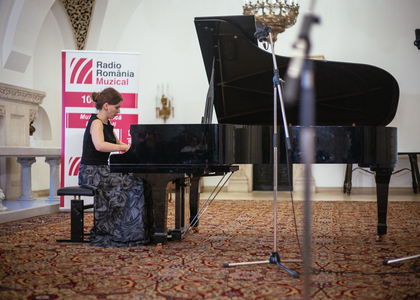 On Monday, 18th May, 2015, Radio Romania Music organised the recital of the performer of 2014's best classical album - pianist Alina Azario - as part of the ‟Vote for the Best Classical Album" campaign taking place on www.romania-muzical.ro. The recital took place at the Cerchez Hall of the Cotroceni National Museum. Lucian Haralambie comes with additional details:

‟It was a great surprise for me. I didn't expect to win this award and I remember that it was one of the year's good news. It's always special when I come back home, when I play for the home audience. To me, both the preparations for the concert and the concert itself bring distinctive feelings. I am very glad that I had the opportunity to play here this evening, at the Cotroceni Palace. I enjoyed the warm welcome and the fact that the hall was full.

That was pianist Alina Azario's statement after her recital last evening, in the Cerchez Hall of the Cotroceni National Museum. Her debut album , including works of French composers Jean-Philippe Rameau and Claude Debussy, entered the ‟Vote for the Best Classical album of the Year" competition, organised by Radio Romania Music, and, as a result of your votes, Alina Azario became the protagonist of the winning album.

‟It's an extremely pleasant meeting. I think it's at the same level that she has maintained throughout the years. Listening to her is always a great pleasure."

‟I'm glad I came here and found her. This palace is a jewel. I can't think of anything else more appropriate than classical music being played here."

‟It's an extraordinary recital. We - Lafarge Romania - are very pleased to support this commendable initiative of Radio Romania Music and I'd like to invite all your listeners to participate in the ‟the Best Album of 2015" event and to listen to Radio Romania Music because, other than the daily frets, we need culture, we need classical music."

His Excellence, François Saint-Paul, the ambassador of France in Romania, participated in the recital of the winner of the 2014's best classical album. Here's what he said at the end of the evening:

‟I am very glad to have participated in this concert. Alina Azario displayed a beautiful programme with wonderful compositions by Beethoven and Debussy and in the end, a work by Rameau that was not simple at all. Indeed, a lot of taste, style and grace. I've had a magnificent, high quality evening."

The ‟Vote the Best Classical Album of the Year" campaign continues. You are invited to vote for the 2015albums , by accessing the section of our website - romania-muzical.ro - dedicated to the project.