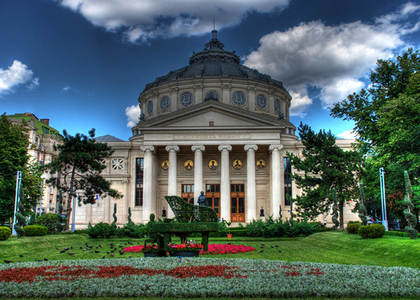 Thursday, 11 June 2015 , ora 11.34
For the second time during the Tuesday soirées, the Virtuoso Quartet returned to the Little Hall of the Romanian Athenaeum; a hall with a level of sound power suitable for chamber music performed with passion, sensitivity and careful stylistic outlining.

Again, the four musicians of the Virtuoso Quartet, members of the "George Enescu" Philharmonic Orchestra and the Romanian Radio National Orchestra offered a touching evening, the emotion being perpetuated at the end of the event through the voice of violinist Monica Buștean: "We will come back and every time we are invited we will honour the invitation much gladly. We have chosen these works as we are in love with music and harmony, thus somehow continuing last year's programme, with Mendelssohn and Schubert's "Death and the Maiden". They are almost of the same genre and I would even say this suits us better, proof being our pleasure in performing for you this evening. Beethoven is a difficult composer to play, he is very overt, technically speaking, but then we came up with Grieg, whose music made our joy when we discovered it and even doubled up our feeling while actually performing it.

The violinists Viorel and Monica Buștean, the viola player Florin Matei and the cellist Dan Joițoiu are four musicians with great energy in playing their instruments, with a well defined musical thinking and a homogenous sonority, appreciated each time when onstage by the audiences. In 2012 they formed the Virtuoso Quartet because they wanted to perform a repertoire as varied as possible and this way to uncover to the public the beauty of each musical epoch; and they certainly suceeded in doing so at the Little Hall of the Romanian Athenaeum on 9th June, 2015.