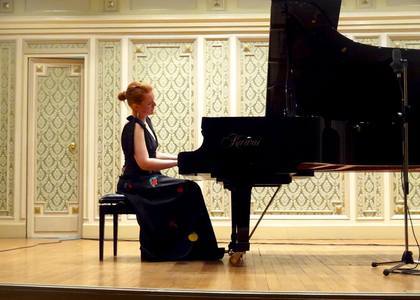 On 24th March, a pianist adored by music lovers returned on the stage of Tuesday evening Season. Aurelia Vişovan is a mature performer with an impressive soloistic career, a name already faimous in the musical landscape. She has confirmed her talent and her rigurous training, coming in first in two piano competitions, in Graz, 2014 and Spain, this year. For the second time at the Little hall of the Athenaeum, with a soloistic composition, the student of the Vienna University of Music chose three sonnets from the works of Frederic Chopin, Jean Francaix and Sergei Prokofiev. A spectacular, carefully chosen layout for the audience, designed by pianist Aurelia Vişovan, who mentioned:

'I have always enjoyed creating thematic compositions and I found that these three sonnets go along very well. I've always included in my programmes works that are connected with each other. They are three relatively difficult sonnets, very different among themselves, two very often played - Chopin and Prokofiev's - and a sonnet that, although seldom played, is still a masterpiece in miniature - talking about Jean Francaix's sonnet.'

Along with the audience, I've appreciated pianist Aurelia Vişovan's artistic behaviour. She showed self restraint, a convincing eloquence and an impressive technical palette. Through the three sonnets that she performed, Aurelia Vişovan confirmed once more that she has the traits of a musician that is able to achieve great success on the piano music level.