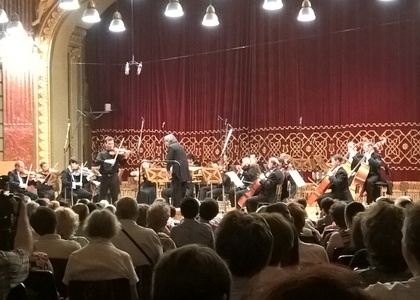 Thursday, 9 July 2015 , ora 15.28
On Wednesday, 8th July, at the Romanian Athenaeum the Bucharest, the Bucharest Virtuosi Orchestra with their conductor, Horia Andreescu, started the latest edition of the Magic Summer Festival, which is organised by Lanto Communication. The festival has had its fourth edition in 2015. The first performance within this series was entirely dedicated to Wolfgang Amadeus Mozart and after the Little Serenade in D major the audience listened to Alexandru Tomescu'sa solo performance of the Concerto No. 4 for Violin and Orchestra.

The Symphony No. 40 in G minor signed by Wolfgang Amadeus Mozart was the ending performance of the programme held at the Romanian Athenaeum, in the Small Hall, that proved to be indeed too small for the audience. This is how the first evening of the Magic Summer ended.

'Wonderful ! Especially because I enjoy Mozart's music very much. It really was a surprise.'

'The sound was godlike.'

'The fact that we're here is a convincing proof that this is important to us, and we need this kind of events.'

'The Lanto Communication productions are very special, as usual. And Tomescu really is a Virtuoso. The violin he performs on is really worth it. Culture has always been important in Romania, and perhaps its importance has been greater than we can consider at this very moment. Take a look at how crowded the Small Hall has been! The important thing is that a lot of young people have attended the concert, haven't they? '

The audience stood up and gave a round of applause to the Bucharest Virtuosi Orchestra, an ensemble that successfully celebrated their 25th anniversary on this occasion.

We also talked to this evening's conductor, Horia Andreescu at the end of the performance:

'It has been a typical concert for the Virtuosi Chamber Orchestra of Bucharest. The concert has celebrated our 25 years of collaboration, especially within the classical repertoire - Haydn, Mozart, and even Beethoven. On this occasion, we have met again our colleagues, friends, and musicians, people who have been playing in this ensemble for years and also young people from the Philharmonic Orchestra and the National Radio Orchestra, as you can see. They are students, people who manage within a few days to build a proper form, to acquire expressiveness, to be spontaneous, and to bring to life an important music, such as Mozart's is to us, very clearly and beautifully.'