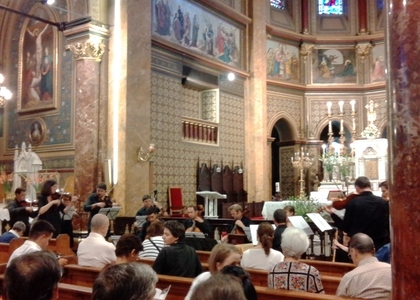 I admired the homogenous sound of the Baroque Orchestra which performed the concert at St. Joseph's Cathedral in Bucharest on Saturday, 11th July, 2015, within the Miercurea Ciuc Festival. Antonio Vivaldi, Pietro Locatelli, Carl Philipp Emmanuel Bach and Johann David Heinichen were the selected composers for this Concerto di Concerti, in which the cellist Ciprian Câmpean from Cluj-Napoca was one of the soloists. He is a member of the Transylvania Baroque Ensemble and also the one who offered us the best moment of the evening by performing Carl Philipp Emmanuel Bach's Concerto for Cello and Orchestra in A Major. The experience of watching this mature musician was remarkable; his interpretation was well-grounded in the style requested by the score. The other soloists were Dorá Király (Berlin) on the straight flute, and Maria Petrescu (Bucharest - Amsterdam) on the baroque oboe during two of Vivaldi's concerts.

The Baroque Orchestra of the Miercurea Ciuc Early Music Festival is conducted by Ulrike Titze, concertmaestro and founder of the Dresden Baroque Orchestra. In the end of the performance, she talked to us a bit:

Is it a premiere, or does the collaboration between Ulrike Titze and the Baroque Orchestra of the Miercurea Ciuc Festival have a history ?

This is the tenth time we have collaborated this year. I have worked with a modern chamber orchestra, and last year on these period instruments. I enjoy working with these colleagues.

Tell us a few things about the musicians, about the way you work together.

I met some of them in Cluj in the '90s, when they were studying at the International Bach Academy. On different occasions, they were interested in working with me during workshops, and then with the Baroque Orchestra in Miercurea Ciuc. Most of them have been working together for a long time, but every year new colleagues join them. I like the fact that more and more young people are interested in making music in this way.

Have you shared with them some of the secrets of performing baroque music ?

Secrets ? No. I have an interest in chord instruments, in this age's literature, and in rhetoric, I wanted to find a connection between this sort of music and my life, the present moment. Our life is rich in emotions that have to be found in music and felt by the audience.

And your impressions on this evening …

It was a difficult situation, because we rehearsed in a new room. We started rehearsing 40 minutes before the concert after having travelled for five hours, but all my colleagues remained focused and the acoustics were good I was surprised by the great audience and the intense atmosphere. And in the end, everyone enjoyed it.

Here are more impressions on the concert of the Baroque Orchestra at the Miercurea Ciuc Festival:

'I arrived here filled with joy, but also with a great feeling of nostalgia, because I participated in the first edition of The Miercurea Ciuc Festival with the Musica Rediviva ensemble over thirty years ago. Obviously, the acoustics of this Cathedral do not suit this kind of music so well. They paid special attention to synchronising when performing, I could feel it, because it's very difficult to focus considering the acoustic characteristics of this space. A hall like the Athenaeum would have been completely different. Otherwise, the way in which they put the programme together was remarkable, as well as each instrumentist's quality. I read in the playbill that their studies in the baroque style were solid. I am really glad that this festival is fairly old and that every now and then, it is held in Bucharest. It is an event worth attending and organising in the following years.'

'The concert itself was interesting and attractive, it was something different in this season's staging, an ensemble that I had previously listened to during the festival in Miercurea Ciuc many years ago. I have found it again in a different enviorment - I'm not sure whether Saint Joseph's Cathedral has the proper acoustics for this kind of ensemble; performing within a space with these sound effects is very chancy.

Generally speaking, it was an agreeable programme put together accurately; and if we overlook the occasional slips, the instrumentists interacted pretty well, but what shocked me was that during the final performance (Johann David Heinichen - Concerto in D major for flute, oboe, violin, cello, theorbe, strings and continuo), they didn't try to balance the instrumental intensity; some of the instruments had a very discreet intensity while others a very incisive one, and as each member perfomed it in his way, I was suprised by their lack of interest in bringing them all together somehow in a mezzoforte or a piano in order to diminish the discrepancies.

These are, of course, details, but they are easy to notice by any music lover. I might have enjoyed a more varied repertoire, because I found it to be slightly brought to a common ground. Anyway, overlooking these aspects, it was an enjoyable and beneficial concert.'

'A perfect combination between music and spirituality. It is a wonderful universe. We always want such events to take place.' (Valeriu Ghimpu - engineer)

'We can rarely listen to early music and this kind of instruments in Bucharest. I was drawn especially by the theorbe and the harpsichord, the latter comes from England, as it has come to my understanding… being transposed into a different world… Baroque music is really special and I actually read the quotation in the brochure… the happiness you feel when you listen to it… the kindness that opposes evil… something special, and the initiative was praiseworthy. I have heard that Radio Romania was involved in this.' (Virginia Histu - translator)

In our enthusiasm of listening to early music performed on period instruments, we salute this action of those who organized the Miercurea Ciuc Festival, of opening themselves towards the audience in the capital. The ensemble, which is mostly formed by young people, offered us special moments. We would like to have the Festival in Bucharest every year, always expanding, forgetting about their nervousness and little imperfections, in order to have more occasions of listening to baroque music, not only at the George Enescu International Festival. We have enthusiastic audiences. The full Cathedral was a proof of that.