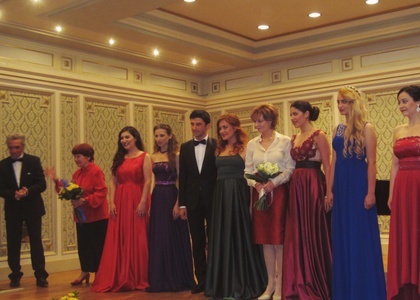 Young Scholars of the Princess Margareta of Romania Foundation Onstage

During the national "Young Talents" project launched seven years ago, the Princess Margareta of Romania Foundation planned to encourage the development of several pupils and students through scholarships, organising master-class courses, competitions around the country as well as abroad, and offering more facilities to students to help them develop their artistic abilities. Rigorously selected, based on well-defined categories and recommended by specialised juries, the scholars aged between 14-24 possessing a real potential in the music and plastic art fields, have the opportunity to try and put to good use their own skills through a continuous training offered by the foundation.

At the beginning of this year, for this year's project, thirty-four young people who study music were selected from all over the country. One of the "formulas" of supporting them, was a master course offered by the tenor Vasile Moldoveanu who was invited because of his experience as a soloist at the Metropolitan Oper House in New York and on other important stages in Europe, where he performed in the last decades, after his first years at the National Opera in Bucharest.

The tenor settled in Monte Carlo a long time ago, and having been invited to work with the soloists of the National Opera in Iași, he happily agreed to collaborate with the Foundation when he returned to Bucharest in order to try, in those few days running the course, to identify and pehaps improve only some of the deficiencies or imperfections of the participant's expressivity, phrasing and breathing, because technically speaking, it would be impossible to improve all those skills in such a short span of time.

I am convinced that Vasile Moldoveanu enjoyed working with the grant beneficiaries who were dreaming of becoming word-class performers. A special advantage was, of course, the fact that the Philharmonic offered the Studio Hall as the venue both for the singing lessons and the final concert, which took place in the presence of Her Royal Highness Princess Margareta of Romania, the General Manager of the Philharmonic, Andrei Dimitriu and the Artistic Manager, Nicolae Licăreț, as well as a pretty numerous audience, along with some of the former students, their teachers and other guests.

The introduction being made by the General Manager of the Foundation, Mugurel-Mărgărit Enescu and tenor Vasile Moldoveanu, the recital on Friday, 10th July, 2015, made possible the meeting with this year's students, some of whom had also participated in the 2014 masterclass course, thus continuing their work with the much appreciated performer who, this time again, emphasized the fact that the young musicians performing in front of them that evening for the first time, were having the emotions and clumsiness inherent to their yet teenage years.

All in all, I listened to good voices, some even remarkable, quite well sustained, with intentional or expressive worthwhile accents; an important thing to emphasize being their adequate presence onstage, their elegant dresses and the costume of the only male solo artist fitting right into the rigours of a formal evening.

Mezzo-sporano Martiniana Antonie (whom I very much suspect to have the voice of a soprano), student at the National University of Music in Bucharest, approached the Seguedilla aria from Bizet's Carmen with self-confidence and perkiness, and the aria from Gluck's Orpheus and Euridice, where she took everyone by surprise with her expressive manner - far from what should have been the correct technique of performing a male role, most probably because she did not know or ignored the travesty the author had intended.

The soprano Diana Alexe, her colleague at the University of Music, went conscientiously through arias from Donizetti's The Elixir of Love and Massenet's Manon, without any particular features, with quite a flat voice, but the soprano Larisa Ștefan, who is studying in Oradea at the moment, won the public with the quality and generosity of her voice and the brightness and firmness of her musical discourse, revealing a pearl-like variation and a spectacular high note use in the aria from Delibe's Lakme, her natural gifts foretelling an important career if she was to be offered the chance to perfect her singing technique.

Another mezzo-soprano - Cosmina Stancu - also student at the National University of Music, convinced the audience that she had a full rounded voice, but her performance with the aria from Tchaikovsky's The Maid of Orleans, always forte with strong intensities even in moments of utter soul torment, startled me; on the other hand, Daniela Popescu, yet student at the Dinu Lipatti highschool in Bucharest, having a well contoured voice at only seventeen, "attacked" the final aria from Puccini's Manon Lescaut, much too difficult for her age, by covering it in excess, in her determination to sound dramatically, and thus generating discrepancies between registers and false high notes.

But the soprano Andreea Blidariu (NUMB) performed the aria from Rossini's Semiramide with accuracy, yet her quite flat voice being at a disadvantage with the too opened emission and a somewhat scholarly "conscientiousness".

The only male soloist from the recital was tenor George Vîrban (NUMB) - who had made himself remarked from his first years in University thanks to his beautiful, warm and full-rounded lyrical voice, sustained by native inclinations which allowed him the phrasing, breathing and performance required by the score - was applauded justly, in Massenet's aria Manon; but later, in the end, in the duet from The Elixir of Love, along with Larisa Ștefan, as he had probably gone through the score at the last minute, Vîrban didn't have the same poignancy and particularly the same way of performing, suitable for the aria, anymore. He opted instead for a longer emission (similar to an elongated 'spoiling feeling'), with no contoured elements, the sequence yet bringing the freshness of youth and the sonority of a voice which, perfected through technique and sincere involvement, may one day claim to become that of a real soloist, something I would hardly ever have the courage to predict for other young participants in the master-class course. Professor Crimhilda Cristescu, PhD, accompanied on the piano.

The initiative of supporting those gifted students, remains worthy of being appreciated by itself. The project of the Princess Margareta of Romania Foundation, offering a chance to students and pupils with low incomes to attain performance in the artistic field, has proved to be especially beneficial and gladly received over the years. A sound example of such practice may be the exceptional cello player Andrei Ioniță, who, "giving in" a unique talent right from his teenage years and being a grant receiver of the Foundation for some time, succeeded in becoming a student at the Berlin University of Arts, and a short time ago won the First Prize in the famous International Tchaikovsky Competition in Moscow, thus becoming the first Romanian who received, at that particular section, the laurels of a competition of a difficulty and span unanimously recognized.

I hope he will be a landmark and a stimulus for other young people to encourage them to attain the quality level of the "chosen ones" through their training and talent stimulated by the help given, at the right time, through generous projects such as the one promoted by the Princess Margareta of Romania Foundation.