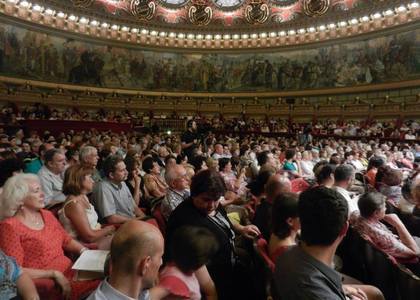 Last evening , on 5th August, 2015, a new episode from the series of events within the ʺMagical Summerʺ Festival, was presented. The festival was held for over six weeks in the wonderful concert hall of the Romanian Athenaeum.

This time, the protagonist of the event was the pianist Valentin Gheorghiu, a remarkable music personality, an artist who has been acclaimed on the greatest concert stages throughout his prestigious career over seven decades. The person who supported him, as we have lately been accustomed to, was his wife, the pianist Roxana Gheorghiu, and two young instrumentalists famous on the all the Romanian stages: the violinist Simina Gheorghiu and the violoncellist Ştefan Cazacu.

The evening started with the Sonata in E minor, no. 1, Op. 38 for violoncello and piano by Johannes Brahms, interpreted by the young cellist Ştefan Cazacu, whose performance revealed special attention to the details of the score, by using a diverse dynamic palette, with a lots of moments where the sonority of the violoncello seemed to be realeased by a mature musician. The first part of the concert ended with the Trio in B flat Major, no. 4, Op. 11 by Ludwig Beethoven, the score being performed by the violinist Simina Croitoru.

We noticed the good collaboration between those two young instrumentalists majestically supported by the pianist Valentin Gheorghiu, who held permanent eye contact with the two musicians and offered them the safety that lead to performing the score with the easiness and joy given by the art of performing. After the intermission, the audience in the hall enjoyed the II Suite in C minor for two pianos By Serghei Rahmaninov.

Thus, the collaboration between Valentin and Roxana Gheorghiu arised the audience`s enthusiasm one more time; an audience that uninteruptedly proved their attachement and the admiration for them, not only for the performance of the two instrumentalists, but also especially for the one who identifies himself with the Romanian music of the last few decades, the greatest maestro of all, an overwhelming personality whose hands convey warmth when tapping the piano keyboard, constantly stirring the audience's desire to watch him and listen to him again and again.

ʺValentin Gheorghiu is a genuine personality. I am very impressed by his piano technique. It was an unexpected surprise to see the maestro inviting young musicians to accompany him in his concert; it was a very beautiful coalescence of generations.ʺ

ʺInteresting, as expected . They are a great team. It seems that the old pianist`s seriousness inspired them. This is very good thing because we need to learn how to master the craft of playing an instrument.ʺ

ʺMr. Gheorghiu is a phenomenon. He plays with dexterity and naturalness. He has dedicated his life and career to music.ʺ

ʺMagical Summerʺ is coming to an end. This is not the moment for the final comments, because I am very sure that in the next few weeks, they will offer us very pleasant surprises, enforcing the belief that this festival is a warranty of beauty.