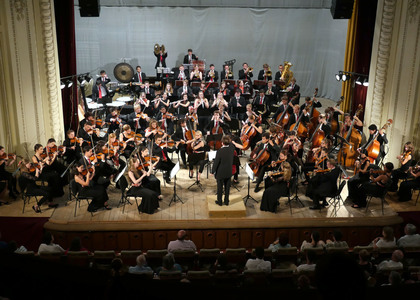 Guests from Vienna and 20th Century Music in Sinaia

Wednesday, 12 August 2015 , ora 15.40
The Enescu and the World Music Festival, which takes place every year in Sinaia in August, keeps on becoming richer and richer in the music it offers. The Festival's structure has become more diverse within the last years, beside the chamber evenings and the symphonic concerts performed by the young musicians and even teenagers orchestras that were 'born' within the Festival, the artistic director Marin Cazacu also invited similar ensembles from other European countries, such as, the Wiener Jeunesse Orchester, which have come once more to Romania to perform a tour in Cluj, Sinaia, and Bucharest.

Obviously, the Casino's Hall was filled with an audience that was eager to listen to this ensemble, which is an important landmark not only in the Austrian musical life, but also worldwide. The interesting aspect about this programme was that it was made up of 20th century works, most of which hadn't been performed in Romania so often. For this reason, this performance was rather appealing to musicians and devoted music lovers.

In the beginning, we listened to some orchestral sequences from Berstein's Candide, the frothy score in which I had hoped to find some of the brightness and humour characteristic to this author's creations, or at least that feeling that could be found in American music; the generally conquering pages of the score were performed as accurately and precisely as the assault of the instrumental combinations were.

On the one hand, I noticed the richness of the sound, and on the other hand, the choice of Herbert Bock, the conductor, of keeping the music's development within the strict limits imposed by the music's tact and the precise indication of the entries.

Then, Berg's Seven Early Songs were performed in the same way, and the instrumentalists successfully kept the intensity low at all times.In this way, the attention was drawn upon the soloistic line, which the soprano Ursula Langmayr performed correctly, proving herself to be specialised in the German way of singing. She opened herself to the acute register, but she also used a semi-parlato that suited the graver parts; and there was no great difference between the two lieder.

The 'forte' moment of the evening was certainly Mahler's Symphony No. 4 which in most cases is well-known to the audience from referential versions. As usual, I expected the generous phrases to be emphasized, the development to be either highly poetic, graceful, and refined or rich in impressive explosions; but then, I realised, once again, that the splendour of great music lied in itself, regardless of the technique of challenging/approaching the score, whose quality could be highlighted both by the conductor's view, the orchestra's interpretation and the performing style that could simply 'flow' with the tide of the notes printed on the score.

Mahler is one of Vienna's representative composers and one of the most loved creators, so it was normal for us to expect the Austrian guests to 'feel' and render the whole vibration and inner emotion that this masterpiece had in it. The sound of the orchestra was dense, as expected, and the composition was performed rigurously and accurately. The vision of performing it was a little 'objective', probably because the conductor expressed himself in the same way as he had done during the first part, by paying great attention to the coordination of the ensemble, to its clear construction, without underlining the colours or the expressive diversity usually so delightful to the listeners.

Music usually 'leads' one to such accents, it 'demands' a certain amount of contrast, sensitivity and a great scope, but I have arrived once again to the conclusion that the interpretation is not always a priority.

During the final section of the programme, the soprano performed the soloistic parts in the same manner, according to the usual reserved-and-correct singing approach.

The beauty of the symphony started intense rounds of applause, along with and the enthusiasm of the audience who not only tried to get closer to the understanding of these really special opuses, but also enjoyed listening to the guests from Vienna.

In the end, the applauses were rewarded by an encore in which they performed the overture to Strauss' comic opera, The Bat. Everyone was surprised by its sound, which was different, vivacious, and bright, from the very beginning. Thus, the orchestra proved that it could also give a lithe and expressive performance when the conductor requested it. It was obvious that the main trait of the Wiener Jeunesse Orchester was discipline and that the orchestra only interpreted the score as the one standing behind the rack allowed it.

These are the things that this evening's audience at the Athenaeum will probably notice as well - or perhaps this programme will sound… different to them!