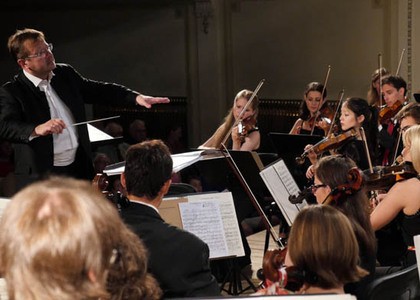 Vienna Youth Orchestra on the Stage of the Romanian Athenauem

Thursday, 13 August 2015 , ora 11.48
The next-to-last concert of this year's edition of the "Magic Summer" International Festival took place under the dome of the Romanian Athenaeum on Wednesday, 12th August and was marked by neatness. The members of the Vienna Youth Orchestra, an ensemble consisting of students aged between 18 and 26 years old, went onstage. Conductor Herbert Bock, a musician with a vast concertistic experience, was at the stand. The programme was a very generous one including The Candide Suite by Leonard Bernstein, a much too soft work for the vivacity of the opera it had been extracted from, Seven Early Songs by Alban Berg and The Symphony No. 4 by Gustav Mahler.

As I was saying, the whole event bore the hallmark of neatness and a certain reticence to excess, excess that might have suited it if it were for certain opuses. Although Mahler's symphony was noticeably the most important part of the evening's programme, Berg's opus drew my attention. This was also probably due to the audience having the chance to listen to the evening's soloist, to soprano Ursula Langmayr's live performance. Possessing a deep knowledge of the musical text and a visibly obvious affinity for German music, she offered the audience a good performance. Without having too strong of a voice (the orchestra seemed overwhelming at times) she brought the Viennese opus to life for the audience attending the concert at the Romanian Athenaeum.

The atmosphere in the hall completely changed till the end. The encore offered us all a scent of a Viennese ball due to the The Bat operetta by Johan Strauss II and The Feast of Fire Polka by Johann Strauss.

The audience fully experienced the spirit of this New Year's concert and applauded for minutes on end, the musicians having made several comebacks onstage.