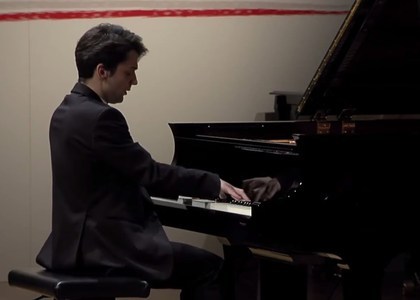 The Subtle Lyricism in Chopin's Music

Friday, 14 August 2015 , ora 11.51
This year in Warsaw, the 17th edition of the International Fryderyk Chopin Piano Competition will take place, competition where dozens of young pianists from Europe, Asia and America listed in. Among the ones who will perform during the last final stage in autumn there will also be Cristian Sandrin, the sole Romanian qualified in this difficult competition of great prestige; because of that, the "George Enescu and World Music" Festival in Sinaia included, as the Artistic Director Marian Cazacu put it, a recital of the pianist no older than twenty-one years old, who was offered the opportunity to perform, in front of an audience, the whole programme he would present in the finale; an opportunity not only for the soloist to "polish" the works he approached, but also for the spectators to have the chance to (re)discover him after his studies at the Royal Academy of Music in London and listen to him playing in the scores required in the competition.

The Hall of the Sinaia Casino was again brimming with people as it was the case with a piano recital that always drew a lot of attention, and because a Chopin evening proved to be a temptation not only for connaisseurs, but also for those who simply wanted to listen to the one who would represent us in Poland.

Obviosuly, the structure of his ample programme was conceived in such a way that Cristian Sandrin approached totally different opuses from Chopin's works, starting with the Impromptu No. 2, Op. 36, emphasizing the delicate touch and the peculiar sensitivity of a soloist who enjoyed the lyricism within the scores, proof also being the manner in which he performed the Four Mazurkas Op. 30, preferring the fading of percussion, characteristic of Polish dances, in favour of a preeminently delicate interpretation; perhaps that was the reason why not the single real difference in atmosphere and content in the Waltz Op. 64, No. 3 that followed did not emphasise the constantly subtle sounds performed during the whole recital.

Nonetheless, a certain change was required with the Ballade No. 3, Op. 47 and No. 4 Op. 52 - when, after the sequences interpreted under similar coordinates, there were moments in piano forte, well-balanced in a concise and logical structure, the soloist later taking refuge into the introspective, perhaps evocative world, suitable to his interior, temperamental structure.

Of course, the Nocturne in E flat major fully answered the need of refuge into the transparent sounds, yet without having the romantic poetry so characteristic of Chopin; The Études Op. 10, No. 8 and Op.25, No.10 brought into the foreground his accuracy and technical precision, the fluency of a well-perfected discourse, so that in the Polonaise in F-sharp minor, one should encounter again the introspection and the dialogue with oneself, the famous Funeral March possessing the same gravity, but not the same oppressive "burden" we were expecting.

Sonata No. 2, Op. 35 was performed in the same manner, the sections in piano forte being played with rigour, but without that large span and brightness characteristic only to Chopin's generous and tormenting pieces.

The audience's applauses were rewarded with yet another work by the same composer whose subtle side was performed by Cristian Sandrin - who understood it especially well - with unanimously appreciated suppleness and high-quality sonority.

The young pianist owned a world of his by talking to himself via the keyboard and trying to clear his mind of the audience in the hall, which would explain why he started every piece abruptly without waiting for the applause to end.

Well-thought within The Third Millennium Generation series, the Chopin recital came with a viable interpretation of several opuses different from the interpretations I had listened to so far. Cristian Sandrin's qualification in the Competition's finale may show the jury's intention of taking into consideration the rather special ways of performing. We wish Cristian Sandrin all the success in convincing the jury at the competition in Warsaw that Chopin can be understood in several various ways which unveil the personality of each soloist able to find something in the score that suits him or her - some by playing it tempestuously, others, as it is Sandrin's case, with an exacerbating lyricism. A truly interesting experience...