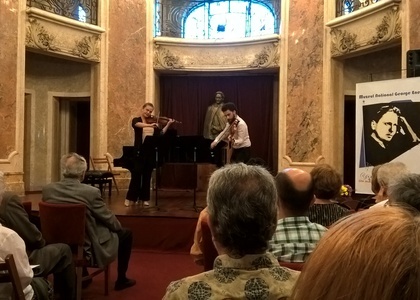 Thursday, 20 August 2015 , ora 15.38
George Enescu's 134th anniversary was celebrated at the Cantacuzino Palace Hall on Wednesday, 19th August, 2015. During the first part of the event, musicologist Viorel Cosma presented the Romanian musician's activity and during the second part, the audience listened to the piano recital performed by Valentin Gheorghiu and the violinists Gabriel Croitoru, Simina Croitoru and Sabin Panea.

Gabriel Croitoru: 'It is a great honour for me to be able to play on Enescu's violin, in his house, on the maestro's anniversary. All Romanian musicians should pay homage to him according to their possibilities and in the best way they could. We, the musicians, should do more to make the maestro's music known all over the world. We are all enjoying these moments together', said the violinistGabriel Croitoru at the end of the recital he performed at the Cantacuzino Palace Hall last evening.

George Enescu's 134th anniversary proved to be a good opportunity for the young violinists, Simina Croitoru and Sabin Penea, who played on the Paul Kaul violins that belonged to George Enescu, performing works from the international repertoire.

Cristina Liliana Andrei, the General Manager of the 'George Enescu' National Museum told us some details about the homage paid to the great composer: 'Today is the 19th August, the day Enescu was born, and every year we have got used to celebrating him as one should, by organising both an exhibition and a recital. This evening, too, we have decided to organise an exhibition to highlight George Enescu, the creator, as he was one of the greatest creators of the 20th century; but unfortunately our age has not been patient enough with him. Perhaps in the 21st century we will be able to appreciate him at his true value; it is a majestic one, so it is indeed quite difficult to get a closer inner glimpse into Enescu's world, as it is entirely different from ours.'

The evening ended with a composition from Enescu's creation, the Sonata No. 3 for Piano and Violin, 'in Romanian Folk Style' played by Valentin Gheorghiu and Gabriel Croitoru.

Musicologist Gabriel Cosma, who participated in the event at the Cantacuzino Palace Hall, stated the following about the musicians' performance: "This evening, the audience, the artists and the professionals, all of us, have experienced a truly special moment. Which exactly? The possibility of listening to Enescu's two Paul Klal violins and Guarnieri's famous Cathedral violin. The manner in which Valentin Gheorghiu played the Sonata No. 3 for Piano and Violin 'in Romanian Folk Style' was of such authenticity that only a person living close to George Enescu could have performed it thus. Valentin has been so thrilled by Enescu's music that this evening he has played as beautifully and authentically as never before. This has made me feel Enescu's music during the entire concert, his spirit being alive and ruling over the entire evening. It has been a truly unforgettable evening.

I am glad that Radio Romania Music is the only radio station that broadcasts a moment such as this bearing George Enescu's hallmark.