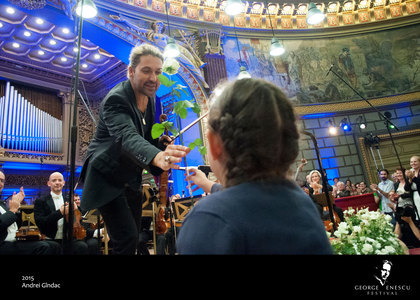 What Kind of Performers Thrill the Audience - David Garrett, again on the stage of the ‘Enescu’ Festival

Wednesday, 16 September 2015 , ora 10.15
The music scene still requires heroes, but heroes exhibit a typological show as well, even if it is not the most relevant phenomenon as a whole. Grosso modo our perception of a name or another is based however either mostly on their performance, that is the music, or on elements associated with music, such as image and attitude, as Nigel Kennedy has accustomed us, for example. Either we want it or don’t want it, we see with our eyes too, it is desirable and at the same time, almost utopian, to judge the musical outcome irrespective of its source.

David Garrett is undoubtedly a rock star of classical music at the moment, and the main reason, I think, for the public to rush yesterday at the Romanian Athenaeum: his long hair, skull rings, macho attitude and themes of Nirvana, Guns N 'Roses or Metallica that he recorded are all old elements of this image, which he identifies himself with. Beyond it, however, I met a romantic violin player in the true meaning of the term. David Garrett practices the simple beauty of tone, a bel canto typical rather to the legends of the last century than to the current trend, he is a real ambassador of rhythm.

His lovely violin timbre is charming everywhere, except the acute register where, perhaps because of the increased attacks on the E cord, this sounded very often wiry, metallic, in Concerto op. 26 by Max Bruch. He played also Enescu’s ballad, composed when the latter was only 14 years old, even if it is not Enescu’s most representative page for violin, it will presumably remain in David Garrett’s repertoire or, at least, in his memory, since he performed it as it should have been performed, without any partiture.

As encores: Sarabande from Partita I by Bach and a few variations of the Carnival of Venice op. 10 by Niccolò Paganini.
Another kind of yesterday evening’s show followed after the break: one offered by Monte Carlo Philharmonic Orchestra and its art director, the Italian Gianluigi Gelmetti. A trilogy by Maurice Ravel was then proposed – with Alborada del Gracioso, Pavane for A Dead Princess and the Bolero, the impression of unity is strengthened by the passage without a break between the Pavane’s finale to the percussion rhythm that opens the Bolero.

A symphony of colours, atmosphere, architectural articulation and style, where that feeling of accomplishment, of entire harmony, could not be but strengthened by the discovery of the logic, with which Gianluigi Gelmetti had put into practice his concept. An exuberance festival anchored within the hispanic meridional of the imaginary of Maurice Ravel, which culminated with a certainly memorable Bolero for the audience from the Athenaeum; an audience to whom Gianluigi Gelmetti who, at 70 years old and debut in Romania, offered a conducting communication show with an ensemble that surely has an art director that it deserves.

Two encores of different types were offered, due to the enthusiastic feedback of the audience: Antract no. 3 of stage music for the Rosamunde play by Franz Schubert and the overture finale of William Tell by Gioachino Rossini.