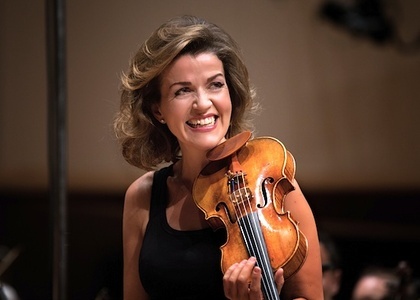 Thursday, 10 September 2015 , ora 10.55
There are certain famous people about whom you might think you've learned everything by noticing them from afar, on the covers of their albums, in newspaper articles and foreign magazines. And yet, meeting them in real life can turn out to be overwhelming...

This afternoon at the Athenaeum was probably one of the most expected ones from this year's edition of the 'Enescu' Festival - the very famous Anne Sophie Mutter was finally coming to Bucharest. At 16.45, I was a little nervous as the hall was half empty, but by five o'clock, it was filled to the brim, as usual.

Anne Sophie Mutter really is a famous violinist about whom you might think you know everything. She has been living in the spotlight since she was thirteen, when she made her debut under the baton of one of the 20th century's most influential musicians, Herbert von Karajan.

At the age of 15, she was recording her first album with the same Herbert von Karajan.

She was not one of the child prodigies who got lost on their way; actually, her career turned out to be spectacular. At one point she made the announcement that she wanted to retire when she would turn forty five, but she eventually gave up that idea.

So there she was, on 9th September, 2015, stepping on stage at the Romanian Athenaeum, dressed up as a fashion icon, in a green dress that emphasized her hourglass figure. Who could tell that she is 52 years old ?

It was obvious that Anne Sophie Mutter would also include contemporary works in her programme, as she usually does. It's possible that her choice was strongly influenced by her former marriage with one of the most acclaimed contemporary composers (and conductors), André Previn. Although they were married from 2002 to 2006, their friendship is still strong. Nevertheless, there are numerous other composers who have dedicated their opuses to her.

This was the case of the two works that she performed during the first part of the concert at the Athenaeum. The first one was Grand Duo Concertant by Krzysztof Penderecki, an opus from 2010 dedicated to the performers, Anne Sophie Mutter and the double bassist Roman Patkolo themselves; the second one was a work that was performed in August, 2015 for the first time, Nonet by André Previn in three parts. However, the works that she chose didn't surprise us, but the performers did; Anne Sophie Mutter, exceptional as ever, was not surprising, but the young men and women who make up the Mutter's Virtuosi ensemble were. Of course Anne Sophie Mutter actually was surprising as well, not as a violonist, but as a Human Being who chose to share her experience with younger people who needed help to break through the increasingly complex and competitive world of the international music scene.

Mutter didn't even need to look at the ensemble, as each member knew exactly what to do. And because the activity of the Mutter Foundation, which supports the Mutter's Virtuosi ensemble, is so worthy of praise, I would like to mention just a few of the names of those who received scholarships over the years and are now known worldwide - the violonist Vilde Frang, the cellist Daniel Muller Schott, the violonist Arabella Steinbacher.

Everybody was eagerly waiting for the Bach and Vivaldi performances in the programme. Those were obviously two of the most famous baroque opuses: Bach's Double Violin Concerto and 'The Four Seasons' by Vivaldi.

Anne Sophie Mutter surprised us once again by chosing to perform the emblematic Concerto for Two Violins and Orchestra in D Minor by Bach with three young violonists: Mihail Ovrutsky (during the first part), Ye-Eun Choi (during the second part) and Albrech Menzel (during the third part). Mutter was the only one to master the extremely fast tempos of the first and third part, and she also managed to perform the intricate details that are specific to those who specialised in early music.

Mutter reinvented herself, because her Bach performance on 9th September, 2015 was different than the one on her 2008 record.

Vivaldi and 'The Four Seasons' were next... in a performance that emphasized the ilustrative character of this work through the recreation of the actual images suggested by the score.

This performance had the same vertiginous tempos in the fast-paced parts, some moments of shimmering fortes, small correlation problems between the harpsichord player and the rest of the ensemble, but the overall feeling was that Mutter is ruling over her little universe.

Nowadays, baroque music can leave a lot of room to experiment: between an authentic performance and what is considered to be a normal one, the possibilities are infinite. It is important that the performer should be convincing, which both Anne Sophie Mutter and 'Mutter's Virtuosi ' achieved, judging by the audience's reaction and their applauds that brought them back on stage to perform the the highly expected encore. Once again, Vivaldi's Winter was followed by Bach's famous Aria from Suite No. 3. I felt that this last encore recreated Bach's portrait as I had pictured him to be - warm, philosophical, deep.

It was surprising that Mutter and her ensemble's Bach performance reminded me of a certain evening at the Berlin Philharrmonic when I listened to the same work by Nigel Kennedy and the members of the Berlin Philarmonic Orchestra. But Mutter is a violin player who made what I find to be the right choice, of constantly changing in a world that is also rapidly changing itself. Who could have foreseen the great success that Mutter had by performing a classical music concert at a nightclub in Berlin ? The recording of this concert is on her latest disc that appeared in August, 2015.

Who knew that one of her concerts from the 2015 tour with the Mutter's Virtuosi ensemble was held to raise funds for the restoration of the Palace of Versailles ?