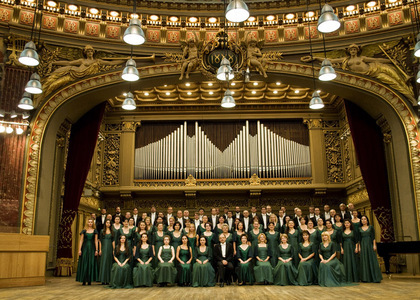 Monday, 7 September 2015 , ora 9.52
'If all the people in the world with depressive issues fitted in a church for this type of concert, the pharmaceutical companies would turn bankrupt'. A plastic definition of Bach's six motets that was formulated by Sir John Eliot Gardiner. This was also an accurate description of the event which took place on 6th September, at 19:30, in the overcrowded hall of the Saint Joseph Cathedral in Bucharest.

From all the projects in which the 'George Enescu' Philarmonic Choir is gathered during this year's edition of the festival (which are not a few), this one can be considered to be one of the most relevant to highlight the artistic qualities of the ensemble. A bold gesture (even a historical one) of the conductor Iosif Ion Prunner was to perform Bach's six motets, which are extrodinarily complex and dense. The choir, in the chosen structure that included basso continuo (with Simona Săndulescu playing the pipe organ) had the possibility to flaunt its virtuosity and sensitivity, especially during the lush moments that had a rich polyphonic structure, from four to eight voices.

Insipiring, even festive, despite the fact that they were meant to be performed at funerals, Bach's motets could be 'prescribed' to anyone, not only to depressed people, according to Iosif Ion Prunner, who conducts the 'George Enescu' Philarmonic Choir. A wonderful evening for those who chose this concert from the loaded programme of the day.