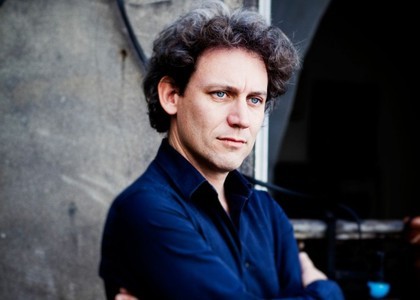 Tuesday, 15 September 2015 , ora 9.23
On the 14th September, 2015, after the performance of his ensemble, Les Dissonances, David Grimal held a dialogue conference with the Romanian audience, as part of the Aspen Ideas Festival.

David Grimal is not only a great musician, but also a man who has a clear speech on the role that music plays in our society, both for himself and for all of those who perform it. According to Grimal, we often bow to the apparent brightness of the musical act, but we do not take an in-depth look at it to discern whether all the levers that make it work abide by the moral, ethical and aesthetic laws. A musician works day and night, without a vacation. And each member of the audience should also follow his own thinking discipline to participate more intensely in the joy of a concert. Music is not only an aesthetic choice, but a way of life.

Last night, on Monday, 14th September, 2015, David Grimal answered a few questions as a guest of a meeting of The Aspen Institute at the Small Hall of the Romanian Athenaeum by using several culinary and musical comparisons in tune with the language and concerns of the modern society:

For me, organising concerts or festivals and recording albums is incredible as long as it is done for the sake of music. If this does not happen, it's not that good, because it means we are living in a system in which creativity suffers from a lack of freedom. This is exactly the case of Romania, isn't it? To join the European Union, this country had to adopt its hygiene laws regarding the vegetables and meat. But these laws are not necessarily beneficial, which is why the local tomatoes and meat have changed for the worse. This is no longer to the people's benefit, but to that of the supermarkets. The same logic applies to music, too. I could compare the ensemble that I am leading, Les Dissonances, to some growing tomatoes. Maybe they're not the most beautiful ones, but when we cut them, we can find tomato juice, real music, inside them. I do not wish to start a revolution, but to perform with love, because when we start doing something out of love, not anger, we make others share in our joy and we eliminate the negative, depressing vibes, which exist in music as well, not only in real life.