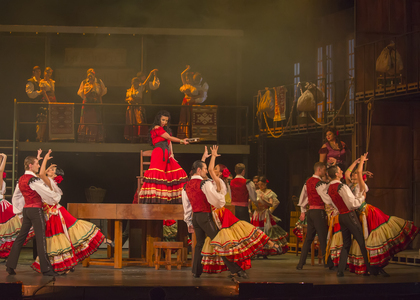 'Carmen' at the Iaşi National Opera Half a Century Later

Tuesday, 22 September 2015 , ora 10.14
It is has become common for the Iaşi National Opera to start its season with a special event. The 2015-2016 season invites Iaşi National Opera's audience to rediscover Bizet's well-known Carmen in the middle of September, a new production brought back on stage 'in new clothing', replacing the half-century old production performed until recently.

I do not think it's a coincidence that the team that created this productioncame from all over the world, as the Czech director Karel Drgac collaborated with Cristina Cottescu from the NOB, as Assistant Director, with Josef Jelinek from Prague, as costume designer, with Octavian Neculai (from Bucharest) as set designer and the famous Carlos Vilan from Madrid, who was invited to work on the choreography.

Happily, the traditional vision upon this work was kept, the plot being acted according to its age, but the interpretation was as a modern and a more vivacious one.The characters interacted with each other naturally, while their Spanish passionate temper was contoured by the many dances that completed the performance, characterised by both the exuberant flamenco choreography and the classical duets that seemed out of the common background, in a mixture that is often employed by the choreographer, as he himself confessed, probably to create a strong contrast.

The sets changed according to the scenes, for example, the square in Seville with its familiar fountain common to all Spanish towns, surrounded by houses ornated with arches and balconies, set against a metal structure that divided the background into two parts and facilitated the permanent fluidity of the space, balanced the 'street' plan, thus completing the scene as a whole and leaving enough space for Lilas Pastia's Inn set on different levels with added steps and walls that created the picturesque atmosphere of the inn lighted by a red, opaque light that highlighted the well-known tables, which were surrounded by wooden chairs in the first act, and a huge round table where the characters would climb up, probably as a reminder of the bullring... that was to come; but the atmosphere changed totally in the third act, when several smugglers climbed down the steep,grey rock walls, carrying heavy sacks on their backs and holding torches in their hands; there was only a narrow path left for those resting in the 'camp' in the mountains; the introduction was played by the entire orchestra, enveiled in the foggy night, with two young people in love embraced in their expressive, tender and passionate dancing, a genuine neo-classical 'pas de deux' apparently cut out from... another heart-warming and romantic story.

The surprise was that the plot turned out to be 'connected' directly to the final act, when the cave's walls 'opened' to make room for the space at the front of the bullfighting arena innundated by 'white' light; there you could see the posters picturing bullfighters and angry bulls, a wide gate that allowed the people participating in the bullfighting to enter followed by the dressed-up spectators, all advancing as if in a parade; the whole scene was preceded by a brilliant and enflaming flamenco choreography performed on the Arlesiana Suite by Bizet, the ballet dancers being entirely absorbed by its specific rhythm and swaying movements; another sursprising classical 'addition' were the proud bullfighter and the slender ballerina in black that was holding a pair of bullhorns, representing the bulls, who 'fought' gracefully intertwining with the interpreters of the Spanish folk dancing.

After the spectators had entered the bullfigting arena, Carmen remained in front of the gate, ostentatiously awaiting Jose as if planned; the two confronted each other violently, he found (rather... too obviously) a knife (that Carmen had also noticed previously as if anticipating the final moment) on the ground, he stabbed her; and during the final words - "You can arrest me.
I was the one who killed her!" - there come... Frasquita and Mercédès who tried to grab the knife that... caused his death, too. Was he stabbed by mistake, or did he throw himself against the fatal blade trying to commit suicide? I am not sure; but the ending was certainly unexpected and completed the 'series' of events in the opera's Prelude, when Don Jose murdered a person, according to Merimee's story, but... not to the composer.

The truth is that neither the escape in Act I nor the moment when Micaëla's hiding place was 'discovered' by the smugglers were clearly presented ... Most of the colourful costumes kept their genuine Iberian characteristics, the dresses were printed in vivid colours with a lot of red in them, some of them identical (I do not know why) while some others had a totally different design and tailoring, getting somewhat 'lost' among the rich ones ornated with frills; most girls were wearing strap shoes, Carmen was initially barefoot and Micaëla was wearing high-heeled black shoes even when climbing up the mountain, although she was supposedly a 'peasant girl'. The soldiers' uniforms were yellow and cream-coloured, the children had loose costumes suitable for the XIXth century or perhaps the XXIst century, Carmen's dresses were provocative and in good taste, Don Jose changed his uniform into a black outfit and Escamillo had a genuine bullfighter costume which was elegant and bright. The choir was included in all the scenes, but, similarly to the great number of children, they made fixed gestures or froze with their back to the main characters of the drama unfolding onstage in Act III while the soloists were constructing believable characters, who lived intensely with occasional outbursts full of pathos, despair and dramatism.

The cast to this production was equally balanced with Romanian and international interpreters. The third performance I attended with mezzo-soprano Ramona Zaharia - currently a soloist at the Düsseldorf Opera House in Germany- in the title role after her years as a soloist at the National Opera in Timişoara, returning as a guest onto the Iași stage where she had taken her first steps in singing opera music, but, incredibly... as a member of the choir! Beautiful, with her enveiling, equally balanced and harmonious voicethat she controls with confidence - with her wonderful high notes and perfect phrasing and elegance suitable for French music, she proved to have excellent pronunciation and easiness in uttering the prose lines - because the Iaşi version offered the score that included the prose lines - usually cut out - intertwined with music.

Ramona Zaharia was truly Carmencita as envisioned by all music lovers and directors, a good and expressive actress, being predominantly an artist who knew how to and could sing and interpet her role naturally and extremely well. Her partener was tenor Marius Budoiu from Cluj whose experience and intelligence highlights his every interpretation; he approached his role with energy and nuances, interpreting the 'La fleur que tu m'avais jetée' aria similarly to a lied but finishing it with force and exploding in the final acts, seeming to experience it more intensely than ever.

Soprano Ana-Maria Donose interpreted Micaëla in a way that was far from being the feminine, innocent and shy country girl, but rather determined and daring even during the love duet, and brave when being challenged by Carmen, characteristics obvious in her attitude and manner of singing with her strong and well-controlled voice. Baritone Adrian Mărcan (from Braşov) emphasised his generous timbre and impressive stature with Escamillo's haughty posture which he equalled vocally, as well - perhaps a little bit too strong when singing the aria - and warm and passionate with the same Carmen.

(More) extremely pleasant surprises were soprano Angelica Mecu-Solomon (Frasquita) and mezzo-soprano Marinela Nicola (Mercédès), who both countoured their characters as nice role models and sang them so well that they completed the choir with rigour and finesse similarly to tenors Florin Roman (Dancairo) and Ovidiu Manolache (Remendado), a good example of this being the quintet in Act II. Baritones Victor Zaharia (Zuniga) and Ioan Cherata (invited from Craiova to interpret Morales) were equally good members of this homogeneous cast by creating the relationships with the other partners, acting naturally and professionally and balancing the whole musical discourse.

The choir (trained by Manuel Giugula) sang clearly and expressively (the tenors in the first act being somehow hesitant), the children's choir (trained by Raluca Zaharia) sang the score accurately and too 'sonorously' at the beginning of the first act, and then more tempered within the required limits; the scene created being that of the nice children crying and fretting too much when seeing the flag raised on the pole and covering the singers'voice.

I would like remark the same regarding the exaggerated tapping on the floor during the flamenco dancing whose choreography was very nice, but ... which obviously estompated the 'gitano song' so beautifully performed by Carmen. The orchestra played densely on fairly different levels; I would have expected a more energetic, bright and ... meridional interpretation, but the conductor Cristian Oroşanu chose a style of interpretation characterised by reserved precision, although there were pretty numerous and fairly severe gaps in the relationship between the stage and the orchestra, which eventually started paying attention to the entrances, themes and the general construction, giving that evening's performance unity and coherence; it rightly received its applauds and ovations from the enthusiastic audience that had filled the opera house's hall to the brim.

The opening of the new season with this new production of Carmen was surely a very inspired idea of the manager Beatrice Rancea; it will certainly be a 'long series of performances' because Bizet's opera has always enchanted the people all over the world; this new production is a joy to the viewer and offers a high quality musical performance to the audience. As to the minor slips and failures, I know they will easily polish them for the next performances, after having overcome the emotion of the first performance and it will all 'settle down' as a very beautiful version worth seeing and... listening to.