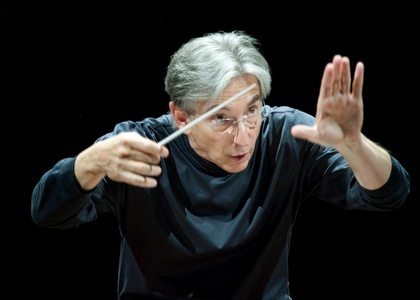 Tuesday, 8 September 2015 , ora 12.57
Enescu, Adams and Beethoven during the evening on 7th September at the Grand Palace Hall; the second concert held in Bucharest by an orchestra that arrived here from the other side of the world: the San Francisco Symphony, which is conducted by Michael Tilson Thomas.

The instrument trucks, which had been delayed the previous day, were finally at their place; you could tell that it was Monday: some of the audience members arrived straight from their workplaces, dressed casually, while others were late, and there were a lot of empty seats left when Michael Tilson Thomas, who was standing behind the music rack of the San Francisco Symphony, started a performance that included some lesser-known works in the first part: Voix de la nature by George Enescu and Absolute Jest by John Adams.

Unfortunately, Voix de la nature is one of the lesser-known works in the repertoire of Enescu, even in Romania; this opus with its soft, autumnal, rather romantic tones would have deserved a better faith. For me, that was the first time I had ever seen a foreign orchestra at the 'Enescu' Festival performing a work of Enescu passionately, confidently and, above all, obviously delighted. An orchestra from the other side of the world which, under the careful guidance of one of the most remarkable conductors of our time, created a soft, delicate autumn image with a plastic emphasis on the rich sonorities in Enescu's work. I think that it's very likely for Voix de la nature to remain in the repertoire of the American orchestra, because I saw that glow in the eyes of the instrumentists and the conductor which indicated that they were performing this workout out of joy, not obligation. I think that the Romanian audience applauded the work of Enescu less than that of Adams because we rarely hear Voix de la nature during the Romanian seasons.

On the other hand, I think that the audience applauded the work Absolute Jest by John Adams because it belongs to that kind of contemporary music that can rouse the audience's enthusiasm if it is well interpreted. Through this 'window' that the San Francisco Symphony opened I could watch this outworldly and unique concerto for string quartet and orchestra signed by one of the most important contemporary American composers, John Adams, as if I were at the cinema. Absolute Jest, a work ordered by and dedicated to the San Francisco Symphony, is the American counterpart of Beethoven's themes of the Pulcinella Suite by Igor Stravinski, or at least this is the way in which John Adams describes the genesis of this work. It did not sound as a jest to me, but rather as an intellectual meditation based on short and fugitive excerpts from Beethoven's works. The greateast attention was paid to the obsessive, unmanageable rhythm, which was sovereignly restrained, as a wild horse under the rein of an experienced rider - this being Michael Tilson Thomas, who gave to John Adam the idea of this work. The soloists were the members of the St. Lawrence String Quartet, who stood out even through their clothing (the three boys were wearing a casual, blue-toned outfit, while she was in a blue dress with sequins). Their performance was convincing not only through the sound cues, but also through the visual ones, as the instrumentists were entirely dedicated to their performance, and I think this also roused the intensive applauds of the audience.

After the break, they performed the Symphony No. 3 by Beethoven: the hall was crowded (all the people who had tickets had arrived) and the expectations were obviously high. When there are so many valuable models for the interpretation of Beethoven's Eroica, it's really difficult for the orchestra to come up with something new and convincing. But the San Francisco Symphony did it. The feeling that this performance gave me was the same one I had gotten at the concert of the Berlin Philharmonic. The orchestra was perfectly welded together under the baton of the extraordinary Michael Tilson Thomas, who conducted this work through a single glance, thus proving his proficiency and competence. The picture of Beethoven's work was harmoniously displayed by the American conductor: the sounds followed one another logically, the speech was faultless, the tempos were very well-chosen and, above all, the funeral march in the second movement of the symphony gave me such an intense feeling. The fourth movement could have been more intense, but … Only God is perfect, isn't He?

The members of the Berlin Philharmonic seemed to be alien-like, but the American performers seemed to be little gods who had gotten used to act like human beings: after all, even the conductor had a glass of water between the movements of Beethoven's Symphony. The performance ended with an encore and a bunch of flowers received by Michael Tilson Thomas, who offered them to the Romanian violinist Florin Pârvulescu.