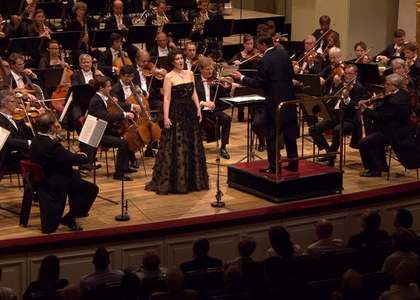 With Richard Strauss in the Alps on the Way to... Immortality

Sunday, 6 September 2015 , ora 9.47
One conclusion is certain after the concert at the Palace Hall on 5th September - neither soprano Anja Harteros is Renee Fleming or Anna Netrebko, nor the Staatskapelle Dresden is the Berlin Philharmonic.

I think I am at a disadvantage because I listened to the Staatskapelle Dresden after the Berlin Philharmonic; the fact that I spent the evening of 5th September at one end of the Palace Hall, whose acoustics we have already talked about enough,was not helpful. So I am in the position of a subjective critic; and I am really subjective because I had already listened to the Vier letzte Lieder versions - the first musical piece in the programme of the Staatskapelle Dresden - sung by two of the leading sopranos of our times: Renee Fleming and Anna Netrebko. Renee Fleming's album was under the baton of the same Christian Thielemann, who conducted the concert on Saturday evening.

And yet... Anja Harteros, the soloist on 5th September, does not have the inborn vocal qualities of Renee Fleming and Anna Netrebko; neither Richard Strauss' score, one of the most difficult ones, not necessarily from a technical point of view, but rather expressively, could not hide this reality. The place where I sat may have hampered the soloist's voice covered by the musical discourse of the orchestra most of the time; it may have been only my impression that Anje Harteros' voice was too vibrant at certain times. Obviously, Anja Harteros is an intelligent singer with a very good diction, who speculates all her vocal possibilities; but, at least for me, it was not enough. Due to its message, Vier letzte Lieder is one of the most touching piece of music for soprano and orchestra ever written; it is the last opus ever completed by Richard Strauss, his farewell greeting to life that transmits a heartbreaking emotion, the feeling of a final goodbye that was absent in the soprano Anja Harteros' interpretation. Sincerely, not even the orchestra led by Christian Thielemann helped her too much: from the little offsets to the effort of playing correctly, but indifferently; nevertheless, I liked the orchestral coda in the September lied.

Malven - an unfinished Richard Strauss lied - was added between the first and second Vier letzte Lieder, arranged for orchestra by the contemporary composer Wolfgang Rihm as the conductor of the Staatskapelle Dresden, which seemed a beautiful work to me, but not in tune with these wonderful and heartbreaking Vier letzte Lieder.

We eagerly awaited the second part of the programme, Richard Strauss' Alpine Symphony, knowing that it was performed for the first time in 1915 by this Staatskapelle Dresden, and conducted by the composer himself. Well, the second part of the concert on 5th September, was, indeed, more convincing than the first one; I could imagine the musical paintings described by Strauss in this typical programmatical work, I enjoyed the climax of the traveler who reached the top, I enjoyed the sound of the cowbells (this one was the most delightful part for the audience), the arrival of the night and the concluding moment of the hiking. Everything would have been perfect if there had not been desynchronization between the woodwind instrumentalists' section and the rest of the orchestra; it would have been much better if the piano nuances had been exploited more, if they... had been played with more emotion.

Yes, I think more excitement is exactly what this second concert of the Staatskapelle Dresden conducted by Christian Thielemann, generally lacked; a good orchestra with a venerable history of over 500 years, but still... only an orchestra, not a musical organism, as I perceived the Berlin Philharmonic Orchestra on 3rd September.

The audience applauded frantically at the end of the Alpine Symphony, hoping for an encore that never came; I saw a smile on the face of Christian Thielemann, the conductor who seemed cold and harsh. Thielemann, this enigmatic conductor who has exceptional recordings of Brahms and Wagner's works, deserves his position as director of Richard Wagner Festival in Bayreuth.

(And) this is why the 'George Enescu' International Festival is good: to display the musical contemporary values, from which we, music lovers, whether connoisseurs or not, should choose their favourites ...