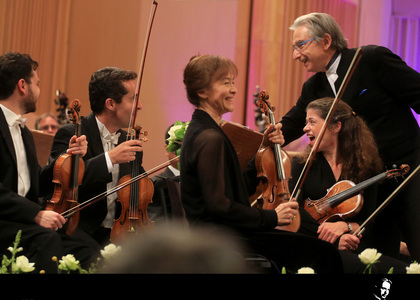 Tuesday, 8 September 2015 , ora 10.54
After a first explosive evening in which we passed from Bartok's motric energy to the metaphysical depths of Mahler, yesterday (Monday, 7th September), the San Francisco Symphony returned on stage at the Grand Palace Hall and made a bold proposal, as it generally seems to enjoy making. From the beginning, the approach on Enescu's paper (Voix de la Nature), which was only recently brought to the audience's attention, represents a choice indicating that the American conductor Michael Tilson Thomas enjoys going off the beaten track and has a special affinity with complex opuses that require him to pay a great attention to the timbre, colour and the highlighting of contrasts between the sensibility of the lower registers and the brilliance of the higher ones, as those in this valuable masterpiece signed by George Enescu. 'So beautiful !' whispered with admiration a member of the audience in front of me to the friend that accompanied her, as she was conquered by the intelligent manner in which the famous American ensemble performed the opus of the Romanian musician. I agreed with her and I was wondering if she would be equally pleased by the following work in the programme, Absolute Jest by John Adams, who is one of the most beloved contemporary American musicians and his works are often performed on stage. He is also very intimate to the San Francisco Symphony. Adams cleverly combines the minimalistic resources with the rich sound traditions of this current. And although his wonderful work was impeccably performed by the American Orchestra and the 'St. Lawrence' String Quartet, to which it is also dedicated, a part of the audience that filled the Grand Palace Hall was not seduced by the incisive sonorities that clearly brought up quotes from a number of well-known Beethoven opuses.

It is also true that Absolute Jest, a virtuosic, well-sustained opus, a real instrumental 'tour de force' for the performers, does not count on emotion, but it has a brilliant, minimalistic construction, based primarily on the rhythmical, pulsating aspect. The melodic structure is based upon motifs and its development is based on a repetitiveness that eventually reveals the big picture of a sonorous puzzle in which what can you hear at a certain moment is closely related to what you could hear before, but also significantly different. In other words, an attractive, imaginative language, but not very easily assimilated by an audience that is unfamiliar with the contemporary sonorities. This opus, however, represents its precious contact with a major musical style that appeared in the late twentieth century.

'I hope they will make up for this work in the second part of the programme' - grumbled an elegantly dressed gentleman during the break. And the musicians did it, but in their own clear and accurate style, paying attention to details and faithfully following the elegant indications of Michael Tilson Thomas, thus rendering the famous Symphony No. 3 'Eroica' by Beethoven very neatly and almost flawlessly from a technical point of view, with the exception of some slight delays during the last movement. Moreover, the 'heroic' character of the symphony was not fully rendered, as Michael Tilson Thomas focused on emphasizing certain refined, agogic and dynamic details that are not usually highlighted when this work is being performed. However, he undoubtedly took responsibility for his choice . Some people might complain about the the San Francisco Symphony's objectivity, their certain lack of expressiveness, which ultimately leads to a lack of personal touch - even if their performances are almost flawless. But the members of the orchestra and especially Michael Tilson Thomas took responsibility for their choice. The certain fact is that last evening we had the extremely rare opportunityof watching an elite ensemble that is ranked within America's top five. The ensembles across the ocean have seldom come to perform here along this festival's history. This performance certainly was an event, regardless of people's opinions. The San Francisco Symphony proved that music in North America is made with a technical excellence and a bold vision upon the repertoire.