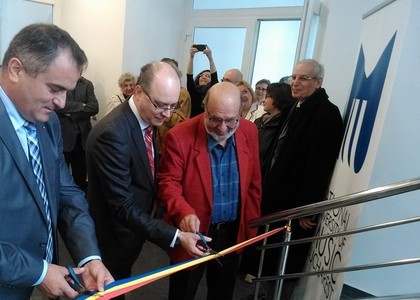 Wednesday, 30 September 2015 , ora 13.35
The inauguration ceremony of a new wing of the National University of Music Bucharest building, the Multimedia Library, took place today at 10.00. The project of the new wing was carried out by architect Călin Irimescu and promoted by Maia Savu back in 2006, when Dan Buciu was appointed as University Rector. They started building the new wing in 2010 and finished in 2015, when the University Rector was Dan Dediu. The cost of this project was entirely covered by the investment funds provided by the Ministry of Education and Scientific Research. This new wing will accommodate the Library, the Media Library, reading rooms, auditoria, cinemas, the archives, the Doctoral School, one Orchestra and Choir Hall, as well as a recording studio.

At the inauguration ceremony, the floor was taken by many guests, such as the State Secretary of the Ministry of Education, Gigel Paraschiv, President of the Union of the Romanian Composers and Musicologists Adrian Iorgulescu, who was assigned as Minister of Culture when this project started, and Rector Dan Dediu. The composer Dan Buciu, former University Rector, was also invited to participate at the ribbon-cutting ceremony.

Here are some excerpts from the speeches of those who were present.

Gigel Paraschiv, State Secretary of the Ministry of Education: I have visited the Media Library, the Library and the recording studios. I have discussed with the Rector and I have learned that all the necessary equipment will be available here starting in November and no later than December. I wish you all the best! Enjoy the things you have achieved and use these rooms to create great things, as the Rector also emphasized.

Adrian Iorgulescu, President of the Union of the Romanian Composers and Musicologists: In the early '70s, when I was in my first year at the University, I was talking to my professors about what rector Victor Giuleanu had done. Some of my professors were brilliant people, but most of them are not among us anymore. And I'm saying this because by the late '60s, the new wing of the building had been finished and we were all very proud of it. Now, in 2015, a similar event takes place and we all have to show our gratitude for the unanimity in supporting this project.

Dan Dediu, Rector of the National University of Music Bucharest: Today we are celebrating a great event in the academic life of the National University of Music Bucharest: it's the official opening of the new part of the building, the Media Library wing. At some point, music has to take you to a state of bliss and fulfillment; but music consists of many other elements including studying and drilling, as we used to call it, which can be exasperating. Building this new wing was the same; we live with the hope that by the end of this year we will be able to perform our activities in a very well-equipped environment, including a concert hall, a great recording studio, a concert piano, stands, etc., not to mention the libraries, media libraries and the Doctoral School.