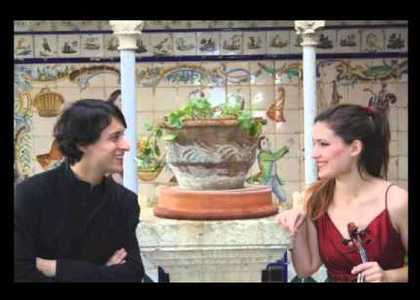 Wednesday, 14 October 2015 , ora 10.10
On the occasion of Spain's national holiday, the Cervantes Institute, the Embassy of Spain in Bucharest and the 'George Enescu' Philharmonic Orchestra held a recital at the Romanian Athenaeum on 13th October, 2015. The encounter between the young instrumentalists on stage can be viewed as a symbol of the connection between the Romanian and Spanish music worlds, as violinist Maria Florea, the daughter of cellist Cristian Florea - who has been living in the Iberian Peninsula for decades now - was born in Barcelona and studied in Madrid, same as the Spanish pianist Juan Barahona. Both of them are currently attending classes at the Royal Academy of Music in London to perfect their skills. Since 2012, they make up a duo that has had a remarkable activity ever since.

Obviously, most of the works that they chose for this programme were Spanish opuses dating back to the 20th Century. They also included other types of music, such as sonatas by Mozart and Ravel, as well as Turina's Poem in the Form of Songs cycle, some excerpts from the famous Seven Spanish Folk Songs and a Spanish Dance - arranged by Kreisler for this performance - by Manuel de Falla. The audience members could notice the two performers' distinguishing qualities from the very beginning. The violinist displayed an impeccable technique that enabled her to build a fluent, expressive and lithe discourse. The lyrical, refined pages of the score and the beautiful sonorities that were not too broad, but which kept their robustness during the forceful parts, seemed to be the most enjoyable moments for her. Maria Florea performed the sensitive, delicate developments with a greater warmth. She will probably become a remarkable musician of a very high calibre once she matures and gathers enough experience. Pianist Juan Barathona proved to the audience members that he had already reached maturity as a performer through his round touch, rich colouristic resources and the expressiveness that he gave both to the transparent and more playful parts of the performance, which were refinedly embellished, and to the more vivacious sections or the graver and more sensible ones. His incisiveness and highlighting of rhythms had a great impact on the audience. I also enjoyed the way in which the two soloists worked together and their proper knowledge of the types of music that they were performing. Their manner of giving prominence to the jazz sonorities in Ravel's score and to the special folkish nuances in Manuel de Falla's works was delightful, too. The Spanish music's flavour was remarkable both in the nostalgic miniatures included in the Poem in the Form of Songscycle - which is probably known to the audience in its arrangement for voice and piano - and in the explosiveness of the Dances or the 'fiery' works that the great composer created. In return for the rounds of applauds, Maria Florea and Juan Barahona came back on stage to perform an encore that surprinsingly consisted of… a work by Rachmaninoff. The romantic, dreamy aspect that we could notice during the entire programme especially in the young violinist was also highlighted during this last work that they performed.

It was a beautiful, unitary and demanding recital held by a charismatic duo that truly enjoys performing on stage. They passionately rendered music in a world of sounds that made them feel comfortable. Their development on stage this evening clearly indicated their great chances of standing out in the musical world. The two musicians built their repertoire logically and attractively, based on their virtuosic technique, while the scores were performed boldly and professionally. Their artistic personality marked the way in which they played both the violin and the piano. I have to admit that I would really like to attend a piano recital held by Juan Barahona (only).