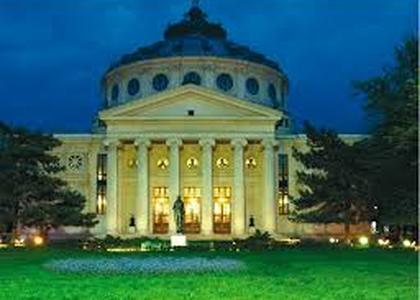 Mahler from an Analytical Perspective

Friday, 16 October 2015 , ora 9.35
Following the evenings when he conducted Mozart's opuses, Camil Marinescu came back to the music rack of the 'George Enescu' Philharmonic Orchestra to approach Mahler's Symphony No. 7; his previous achievements as a performer of Mahler's music were probably among the reasons for which many music lovers gathered under the cupola of the Romanian Athenaeum to listen to his version of the monumental creation.

And it was indeed a very personal approach from many points of view, starting with the orchestra's placement. The three harps were arranged between the percussion and the trumpets; the horn was placed in front of the ensemble in the first part of the performance; the mandolin and the guitar followed in the ending part... The result was that the instrumentalists' movement on stage made unpleasant noises by their arranging the seats (I will never understand why they can't pick them up instead of dragging them across the floor !) and rhythm interruptions which, of course, affected the atmosphere that the music should have created and maintained.

I have to admit I was expecting a performance laden with more unity, density, emotion and meanings, but I was under the lasting impression that a'cohesive line' was missing, that something was not quite right in the bigger picture, even if the orchestra played well and answered to the conductor's demands. Moreover, it visibly got involved in the interpretation of the superb pages of the score.

Although extremely difficult and demanding, the wind instrumentalists' interventions were remarkable (the small errors were unimportant), as was their succesion in complicated dialogues, which were approached accurately, with expressiveness and an appropriate phrasing of the score.

Each party supported the performance in an excellent manner; I appreciated the introspective moments as well as the forceful ones, but the 'whole' did not have grandeur, tension or gravitas, as instead the flow of the generous phrases was somewhat fragmented. Maybe that was Camil Marinescu's understanding of the work.

Because his current manner of conducting is entirely different than the highly appreciated one at the beginning of his career, his almost tense vitality was now replaced by precision in conducting and rigurousity in marking the entries, almost as if he wanted to show the audience a drawing of the 'trajectory' conceived by the composer for each group of instruments, in a complex and erudite web. This is one of the possible perspectives, not quite a unique one, yet I am convinced that music lovers are not drawn by the intrusion in the structure of the score, but instead they only want to enjoy the beauty of an enthralling and expressive music, which cannot be attained simply by decoding the signs and structures in a clearly drawn sketch. I missed the emotion, the inner vibration, the great significance and ardency of the 'minor scale' inquietude that Mahler transmits through his Symphony, and maybe the poignancy of the highlights, too. I think that the moderate applauds did not reflect the reaction towards the performance of the orchestra - which fully deserved our appreciation - but were indicative of the fact that the audience members were expecting more from the interpretation, as well.

The conductor Camil Marinescu is a profound, serious musician, who minutely analyses the score, but I am under the impression that his preoccupation for the technical part is what determines him to think of expressiveness as secondary; it may well be a very personal approach, which is remarkable for the seriousness of the study, but the person who walks into a concert hall must be conquered by the atmosphere that I was hoping to find during the performance, which lasted over ninety mintes. But maybe the second concert will be different...