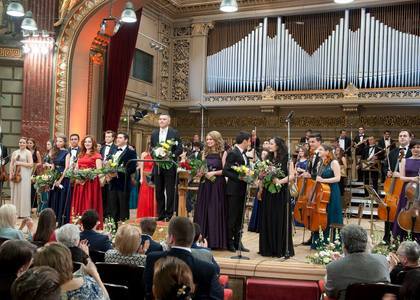 On 25th October, 2015, when King Michael I turned 94, the Romanian Athenaeum was the host of the eighth edition of The Royal Concert fundraiser for the benefit of the 'Young Talents' programme. An exciting evening which started with the singing of the royal anthem followed by Princess Margareta's speech:

'I congratulate all those who are present at the Great Hall of the Athenaeum for chosing to support the future of the Romanian culture together. Each year, too many extraordinary young people abandon their vocation because they don't have the financial resources to develop their God-given talent. Without the 'Young Talents' programme, their contribution to the national and world art would be lost. In the past few years, over two hundred young artists and musicians have performed marvellously; they were endorsed by the Foundation through scholarships, mentoring and promotion ...'

The Princess Margareta Foundation celebrates two and a half decades of activity in 2015 ; some of the 'Young Talents' programme's scholarship holders that performed on the evening on 25th October were also featured in the film that preceded the concert held under the Romanian Athenaeum dome. Same as in the previous edition, behind music rack of the Orchestra of the the Princess Margareta of Romania Foundation was maestro Tiberiu Soare, joined on this occasion by Teodor Ilincăi, one of the most important Romanian tenors of his generation, along with seven other scholarship holders from the 'Young Talents' programme. The varied and highly enjoyable programme included Vivaldi's Concerto in G Minor played by Izabela Ghergu and Cornelius Zirbo, two 17-year-old cellists who study at the 'Dinu Lipatti' National College of Arts in Bucharest. I loved the sound and the homogeneity that conductor Tiberiu Soare obtained from the young musicians, who make up the Orchestra of the Princess Margareta Foundation since 2014, in the second work of the evening - Serenade for String Orchestrain C Major, Op.48 by Pyotr Ilyich Tchaikovsky. As the special guest of the evening was tenor Teodor Ilincăi, what followed was a series of opera arias, zarzuelas and canzonettas. And ... I admired once again a spinto tenor's timbre, those confident and bright high-pitched notes and most of all the involvement and dedication that electrified the concert hall. Teodor Ilincăi jovially presented his younger colleagues: sopranos Diana Alexe, Daniela Popescu and Larisa Stephen, mezzosoprano Martiniana Antonie and George Vârban - a tenor with real chances to develop a future lyrical career. The emotion of an elite Royal Concert to support the 'Young Talents' programme lasted until the end of the evening, when the protagonists spoke:

'The fact that we can support the development of those that will become the future of Romanian music through such actions is a great pride for me.' (Tiberiu Soare)

'Princess Margarita of Romania Foundation's plans coincided with mine, so the invitation to support young talents came at the right time. Tiberiu Soare and I are willing to give up our own free time gladly, at any moment to support the children who lack financial possibilities.It was an extraordinary concert that all of us dedicated to the anniversary of His Majesty, King Michael I." (Teodor Ilincăi)