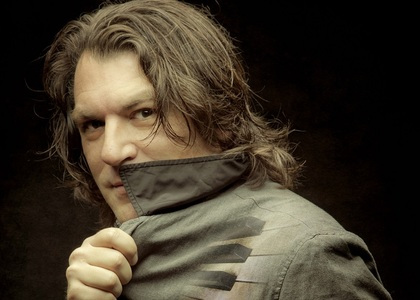 A Lovely Evening of Flamenco Jazz

... was offered to us on Saturday, 24th September, at 10.00 in the 'Mihai Jora' studio at the Romanian Radio Broadcasting Company, courtesy of the 'Cervantes' Institute in Bucharest and with the support of the Embassy of Spain and Tourspain Viena.

They all grew up and developed at the most authentic school of traditional Spanish music.

David Peña Dorantes comes from a family that is deeply connedcted to Gypsy music, a family with numerous generations of instrument players, singers and flamenco dancers.

The house he grew up in was filled by music that accompanied all the important events in his life; therefore, since his very childhood, he was able to take in diverse expressions in which laughter and tears sat side by side and feelings were discreetly and endlessly nuanced by the limitless ways in which a musician can understand and express his deepest and most authentic feelings.

Traditionally, the piano is not an indispensable instrument in the history of flamenco; it gradually appeared as an accompanying instrument, but David Peña Dorantes was the first one to bring it forward as an important and especially overwhelming solo instrument.

A mind-shattering technique, explosive musical imagination, genuine sensitivity and a vision where the past, the present and the future merge together in a creative way !

Let's not forget the implications of jazz, which were also inspiring, as this type of music has a rich improvisatory component, which is fueled by the freedom traditional flamenco music has always been assumed to have.

Out of the meeting of these acoustic universes, the talented Spanish pianist created a new form of musical expression, with an apparent Iberian signature, but at the same time, a universally human one; this work brought joy to the performer himself, who surrendered to melodies, rhythms and harmonies happily, but also to the audience that surrendered to the magic of music just as joyfully.

At his concert in Bucharest, David Peña Dorantes invited on stage other two Spanish artists: percussionist Javier Ruibal Jr. and dancer and choreographer Leonor Leal Chamorro. The well-prepared performers brought the experience of their different careers together, which eventually turned out to be entirely harmonious and complementary.

Javier Ruibal Jr. also comes from a family of flamenco masters: his father was the famous singer and songwriter Javier Ruibal, beside whom the son began his apprenticeship and later, when he was fifteen, his career in concert tours around the world.

Facing a numerous percussion arsenal, where the classical instrument stands alongside the traditional one (the cajón, for instance), Javier Ruibal Jr. turned out to be a master of the colours he obtained from the direct contact with the instruments that he he struck with his fingers, palms and fingernails, but also from the ingenious use of the batons with plastic, wooden or felt heads.

Due to this colouristic variety, the poignant rhythms became all the more interesting and expressive.

Many times, the instruments were joined by the amazing percussion of the heels, tips and soles of the dancer's shoes, thus intensifying the effect until the performance became frenetic.

Ever since her first appearance I could see that Leonor Leal Chamorro had a solid classic training and indeed, in her biography, her studies at the Royal Dance Academy and Professional Dance Conservatory of Seville are highlighted.

The dancer and choreographer studied the history of flamenco thoroughly and she is now bringing it into the present in an inspired mix of old and new, perfectly harmonized with David Peña Dorantes's music. The costumes she wears are carefully stylised, modern yet evocative of the past; because the dancer is aware of the beauty and expressiveness of her body, she gives intensity and passion to her every gesture. The aesthetic of her dance is wonderful, with an impeccable technique. The dancer is also well known for her ability to improvise.

In fact, the entire evening was an improvisation of music and dance, a well thought and organised improvisation that broke free, in agreed-upon moments,in an almost irrepressible fever. The harmony between the performers was perfect. And if I had to find a common denominator for the three strong personalities I had the chance to watch and know, it would be... the refinement that only the best onesare capable of attaining.