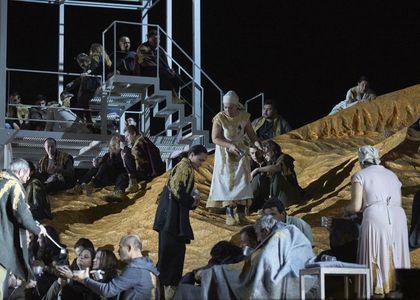 On the occasion of the autumn conference of the international network Opera Europa that will be held from 18th to 21st November 2015, in Bucharest, on the stage of the Bucharest National Opera, on 20th November will take place the premiere of the opera 'Oedipus' by George Enescu, directed by Valentina Carrasco.

At every new enactment, the opera 'Oedipus' represents a challenge for the creators, who accomplished the mission to perform the Sophocles tragedy, a story with a length of over two millennia, transposed into music by George Enescu. Everything in a form that is able to communicate to the contemporary public the humanistic messages of this creation. For the new production from the Bucharest National Opera, the director Valentina Carrasco and her team are trying to combine the atmosphere of ancient tragedy from the story of Oedipus, a character convicted to confront the truth, with the idea that this type of story can take place regardless of time and geographical space.

Valentina Carrasco`s passion for the tragedy of Oedipus and for the George Enescu`s musical work on this theme, a director with a vast experience in the great lyric theaters worldwide, made her set to premiere George Enescu`s opera at La Monnaie Theatre, in Brussels and at Teatro Colón, in Buenos Aires, production that will also be presented on May 2016 on the Royal Opera House stage- Covent Garden.

In the director`s opinion, the main character from this opera is in an eternal relegation, that transports him in different areas, but dominated by the symbol of his own destiny, expressed from the visual point of view, through the sand dunes. In the performance, the omnipresent sand represents in each scene the lapse of time, but at the same time the characters` impossibility to obey to an exterior force that dominates their existence, a negative force that filters through anything, disturbs, hides, but it also divulges.

'I had the feeling that Oedipus is actually caught in the trap of this hourglass of existence, in his destiny, from which he cannot get out, but he admits that we cannot escape from our own trap if we do not see it. The blindness, with which he lives his entire life, until he pulls out his eyes, represents the fact that he did not notice that he is in the INTERIOR of the hourglass, from which he cannot escape until he does not carry out his mission and he does not undertake the reality of this hourglass. Until then, he will fall or he will arise as the grain of sand trapped into the hourglass and all this movement, the attempt to escape will be just an illusion, because the destiny will bring him back to where he left.' declares Valentina Carrasco.

The sets of the spectacle are signed by Blanca Añón, a Spanish artist that has created sets and costumes for a great number of productions presented in Europe and North America; she worked as an assistant set designer for artists, such as Paul Steinberg, Andrew Lieberman and Chloe Lamford and starting with 2014 she has been working as assistant-set designer for the Lyric Art Festival of Aix-en-Provence (France). The costumes are signed by Barbara Del Piano, set designer with a vast experience that has been collaborating over the years with directors such as Mariame Clément, Waut Koeken, Vincent Broussard, Silviu Purcărete and Robert Carsen. The international team of creation of the new production from the Bucharest National Opera is completed by the video designer Esterina Zarillo and the lighting designer Peter Van Praet. At the stand of the Bucharest National Opera will be the conductor Adrian Morar, and among the artists of the institution will be on the stage on the opening night the baritone Davide Damiani, in the titular role.

And the Ballet Ensemble of the National Opera of Bucharest.