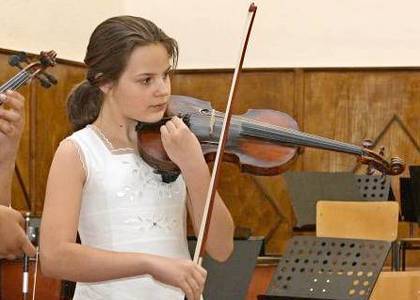 Wednesday, 9 December 2015 , ora 14.02
Tuesday Evening`s Season started last night for the laureates of the 17th edition of "Remember Enescu" International Violin Competition that began in May 2015. We listened two of the violinists that will perform in our country and abroad. Through his performances there is no doubt that Ştefan Şimonca Opriţă will have a great violonistic career. Mihaela Mitrofan and Ştefan Şimonca Opriţă are at the beginning of their careers, but "Remember Enescu" Foundation and through its teacher, Mihaela Tomescu- president of this foundation- support them as she did with the laureates in the previous editions. We mention Alexandra Bobeico and Răzvan Anemţoaiei, that are progressing in their performances.

Mihaela Tomescu was present in the Small Hall at the Romanian Athenaeum and was very interested in listening the two young violonist`s performances.

"We must support them. They must be surrounded by love and care. That`s what we are trying to achieve at "Remember Enescu" Cultural Foundation. Ştefan is also a very active member of our foundation. Mihaela is our guest in the activities we develop. This evening is impressive through the wonderful achievements of these young violin players. The programme was interesting. Everyone noticed Mihaela Mitrofan`s elegance, distinction and of course, her marvelous technique and Ştefan proved to be brilliant and dynamic which is something normal for his age. They are both very young, almost fourteen years old, so this means they have numerous opportunities in the future."

A numerous audience was highly interested in Mihaela Mitrofan who was accompanied at piano by Diana Spânu Dănilă and Ştefan Şimonca Opriţă that performed alongside Adela Irina Lorincz. Ştefan Opriţă seemed much more confident on his violin, he performed with temper and with a clearer intonation compared with Mihaela Mitrofan which has revealed virtuosity and expressivity.

In 8th December we had the honour of a recital full of youth, enthusiasm and of hope for a violin career that the two young violin players dream of.