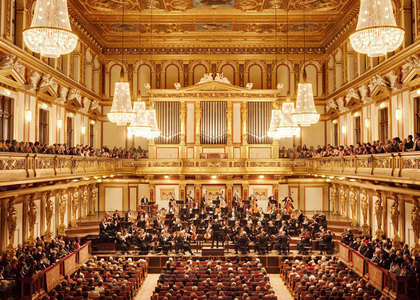 Once again in the golden hall from Musikverein

Monday, 14 December 2015 , ora 10.25
In december, Vienna seems brighter than anytime. I am thinking, of course, about the Christams ornaments that decorate the city in an exquisit and stilish way, but also about the musical life, that rests in a spectacular animation because until the great New Year concert from January the 1st, the public enjoys meetings with the artists and good quality repertoires, on the boards of the National Opera, the Volksoper, the Theater an der Wien, Musikverein and Brahms Hall, the Raimund Theater…- these are only some of the most renowned places in the world, where music is made. I focus my attention on the famous Musikverein and sift out : at the beginning of the month, on 6th of December, an extraordinary Bach concert was announced, in the company of Concentus Musicus Wien, Arnold Schoenberg Choir and the conductor Nikolaus Harnoncourt. Unfortunatelly, because of serious health issues, Nikolaus Harnoncourt had to withdraw from the performance and he even had to announce his retirement from the concert stage, therefore that evening, the conductor was Erwin Ortner ; on 7th of December, the soloists of a complete Mozart concert repertoire performed along with the Chamber Orchestra from Vienna- Berlin were the pianist Yuja Wang, the violinist Rainer Honeck and the violist Amihai Grosz ; on 9th of December, the pianist Rudolf Buchbinder performed a camera evening concert with a complete Beethoven repertoire, on 10th of December at Musikverein from Vienna takes place an appealing and cheerful simphonic jazz concert, performed by the Tonkünstler-Orchester Niederösterreich, having the violinist Benjamin Schmid as soloist ; also from the series of chamber concerts on Musikverein's stage in the great Golden Hall, we highlight the recital held by the violoncellist Gautier Capuçon and the pianist Jean-Yves Thibaudet (15th of December), which consists of an impressive agenda of works by Schumann, Brahms and Rahmaninov; in the second part of the month (16th and 17th of December), the famous Philarmonic of Munchen, the conductor Valery Gergiev and the well known russian pianist Daniil Trifonov, tread the boards of Vienna's Musikverein to perform pages signed by Wagner, Richard Strauss, Rahmaninov and Skriabin; on 19th of December, the reputed musicians from the Wiener Symphoniker orchestra , conducted by Marek Janowski and having the soprano Catherine Foster by their side, bring forth a Schumann- Wagner repertoire, while the New Year Concert from 1st of January 2016 will be conducted by Mariss Jansons.

The viennese Musikverein is one of the greatest and most important cultural institutions in the world. Basically, it is a concert hall (seating for 1744 and standing room for approximately 300 people) but the industry behind this hall is a huge one, for it involves the people engaged in the group The friends of the viennese musical society. A concert in the wonderful Golden Hall is an unforgettable memory. I was so happy to return in this dreamlike place on the evening of November the 29th and to be able to listen the music amazingly performed by the Wiener Symphoniker Orchestra, under the baton of the conductor Adam Fischer. The evening's soloist was the pianist Jasminka Stančul and the program included Concerto for Piano and Orchestra No. 23 in A major KV 488 by Mozart and Symphony No. 7 in E minor by Mahler.

Born in Serbia, the pianist Jasminka Stančul completed her musical studies at Vienna (Noel Flores) and Geneva (Maria Tipo). Her carrier has gone on an ascending path ever after she was the recipient of the First Prize at the Beethoven International Piano Competition from Vienna. She performs on the greatest boards, along with the most appreciated orchestras and the most famous conductors. Chamber music helds an important place in the work of the pianist who, starting with 21th of October, is also a proffesor of the Ljubljana Academy of Music.

Her technique is spectacular, she plays with a delicate touch and has a very powerful pathos. She has an impressively light virtuosity but I confess that I did not fancy at all the sweetened, flat pink fondant like, excesively feminine atmosphere and the lack of any contrast that covered Mozart's music. I acclaimed with much more enthusiasm an extremely difficult Etude which's composer I did not succed to disclose and about which I can say that it truly had a modern, contemporary note and also the Sonata by Scarlatti, that he played as encores.

Adam Fischer is one of the names written in capital letters in the contemporary international music life. I insist on his highly succesful attempts from the lyrical theatre : born in 1949 in Budapest , the musician made his first appearance as répétiteur for the Graz Opera and next, he bounded his name to the musical theatres from Helsinki, Karlsruhe, Munchen and Budapest. In 1980, he makes his first appearance at the National Opera from Vienna, where he conducts the Tetralogy The Ring of the Nibelung and the cycle Mozart- Da Ponte, amongst others. During the 2015-2016 season, his name appears on the playbills of the viennese Opera, bounded to the Tetralogy, Don Giovanni, but also to the La Clemenza di Tito by Mozart and Parsifal by Wagner. Of course, his reputation as a conductor of simphonical orchestras places Adam Fischer among the best contemporary musicians but I insisted, however, on his work as opera conductor in order to explain the appreciation of the way he performed the monumental Simphony No. 7 by Gustav Mahler, in which he rather highlighted the elaborated inner drama, the constant whirl, the sharp conflicts and the pains of a long and demanding creation. The 80 minutes of the composition physically exhausted the conductor, the orchestra - remarkable, by the way! - and the public.

Nevertheless, we still had the power to finally acclaim the musicians for a long while, with truthful feelings.