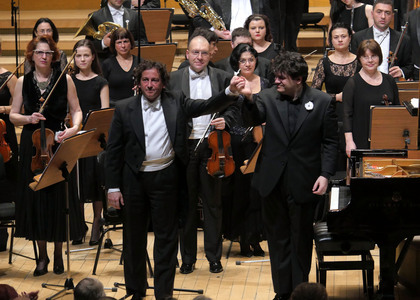 Romantic concert and a double CD release at the Radio Hall

Monday, 14 December 2015 , ora 12.24
The National Radio Orchestra performed on Friday, 11th December 2015 at the "Mihail Jora" Hall under the baton of the conductor Cristian Măcelaru, along with the pianist Horia Mihail. On this occasion, "Casa Radio" Publishing House released another two CD albums- "The Travelling Piano. Horia Mihail- Romantic" and "National Radio Orchestra" with Cristian Măcelaru as conductor, performing works by Mikhail Glinka and Nikolai Rimsky-Korsakov.

The night started with the concert overture The Hebrides by Felix Mendelssohn and Piano Concerto No.1 Op.1 (for piano and orchestra) by Serghei Rachmaninoff. In the second part of the performance, the public witnessed Antonin Dvorak's Simphony No. 7 in D minor- a work composed at the petition of Philharmonic Society of London.

At the end of the concert, the audience stayed a bit longer in order to receive the autographs of pianist Horia Mihail and conductor Cristian Măcelaru.

"I would say that it is a distinguished interpretation and moreover, the way in which Măcelaru took and conducted the concert is in my opinion, an engagement that demands a particular impetuosity from the musician."

How was the concert?

"Wonderful! Rachmaninoff is one of my favourits. He transposes you in a wonderful, terrific world.We feel good, the music heals us, it makes us better! All toghether, this radio orchestra, through it's tradition, delivers always an exquisite performance. Horia Mihail is a great artist!"

"Horia Mihail is popular and outstanding and also very dear to us all! I liked this concert a lot. It truly bears a resemblance to Grieg's concert, in the first part, at least."

Also, last night took place the release of the CDs edited by "Casa Radio" Publishing House in the foyer of the "Mihail Jora" Hall. It is about the first collaboration of the conductor Cristian Măcelaru with the National Radio Orchestra, about which he was saying it was the first concert he conducted in Romania. Cristian Măcelaru is an assistant conductor of The Philadelphia Orchestra and through his career, he conducted many prestigious orchestras from all around the world.

"The album that has just been released representas practically, the first concert that I conducted with the National Radio Orchestra. And, as a matter a fact, it's the first concert I ever conducted in Romania. That is why we wanted so much this performance to remain recorded on a CD and not only in my heart and your's or in the memory of my stage mates. The album brings together very famous and valued Russian repertoire works. And such works are: the overture "Ruslan and Ludmila" by Glinka and then, the main part- "Scheherezade" by Rimsky-Korsakov. For me, it was beautiful experience because I started this collaboration that goes on for some years now and I am very glad that we could record on a disc something that we will always remember."

"It is a CD that I have recorded some months ago, in consequence of the tour "The Travelling Piano" - 5th Edition. Romantic music, music that draws in the first lines of the repertoire presented by the National Radio Orchestra, Cristian Măcelaru and the undersigned."