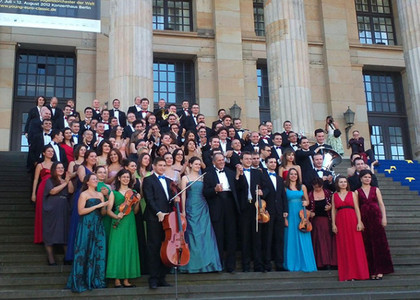 Tuesday, 26 January 2016 , ora 9.18
The Romanian Youth Orchestra directed by Cristian Mandeal will represent Romania in Brussels, in the well-known Bozar Hall in an extraordinary concert that will take place on 1st of February, 2016. The Romanian Youth Orchestra will have Aleksey Semenenko, the prize winner of 2015 edition of the Regina Elisabeta contest, the soprano Olga Pasichnyk and the baritone Ivan Ludlow as soloists with this occasion. The soloists will have arias and overtures from Rossini's, Mozart's, Bizet's works and famous Tchaikovsky's and Waxman's violin concerts and the customary Dinicu's/ Vladigherov's Hora stoccato in their schedule.

The concert will take place at the Romanian Athenaeum two days before that at the Bozar Hall. On Saturday, 30th of January, the event will be made by "Romanian Youth" the National Centre of Arts in partnership with "George Enescu" Philharmonic, only the soloists on the poster will be different encompassing three Romanian interpreters as it fallows: the soprano Paula Iancic, the baritone Serban Vasile, the violinists Rafael Butaru and Radu Dunca together with Romanian Youth Orchestra conducted by Cristian Mandeal that will present the preview of the same program for the Romanian audience. Marian Cazacu, the artistic manager of the Romanian Youth Orchestra, talk about these two concerts.

The Romanian Youth Orchestra conducted by Cristian Mandeal will perform his first concert on the stage of Romanian Athenaeum in 2016 with four of its soloists. What will the audience listen to in the halls?

Even for the Romanian Athenaeum - an iconic hall for the Romanian culture - will be the first concert in 2016. This is a program that we prepared with the occasion of the attendance at the outstanding concert in Brussels. The orchestra will show the same program in Bucharest, too. The same program with different soloists! The orchestra will appear along the winners of the Regina Elisabeta contest at the Bozar Hall, one of the most prestigious concert halls in the world on 1st of February. On the other hand, the soloist part will be formed from four Romanian young soloists - the soprano Paula Iancic from Cluj, the baritone Serban Vasile and the two young violinists Rafael Butaru and Radu Dunca in Bucharest. The two violinists are already the concert masters of the Romanian Youth Orchestra and they will be for the first time the soloists of a concert along the orchestra with which they have lived so many special moments.

The concert in Brussels has a special connotation being a concert with the sister of the King of Belgium herself in audience and having a fundraising part for some categories of children. The program includes different works belonging to Mozart, to Rossini, to Tchaikovsky, to Bizet but also a Romanian work by Dinicu/Vladigherov. I am going to say exactly which works will be interpreted: we talk about the "La Gazza Ladra" by Rossini, Meditation for violin and orchestra by Tchaikovsky, the Carmen Fantasy for violin and orchestra by Waxman. The duets and arias from the works "Don Giovanni", "The Marriage of Figaro" by Mozart and from Bizet's works - arias and orchestral parts from "Carmen" are also interpreted.

After these two concerts performed by the ensemble that you manage what's next for the Romanian Youth Orchestra in 2016? Which are the important concerts?

I consider that 2016 will be one of the culminated years of the Romanian Youth Orchestra's activity. Even if 2015 was an extremely important year for us, maybe with some of the most special concerts in the most prestigious halls and stages, in 2016 the orchestra will be, apart from these concerts in Brussels and at the Romanian Athenaeum, also at the Festival in Ruse, Bulgaria, again in Athenaeum and on 15th of March in Kishinev. After that, we open the Festival in Milano and the one in Ravelo in Italy, in July. In August the Orchestra will be again in Berlin at the "Young Euro Classic" Festival. In September the Orchestra will close the "Gustav Mahler" Festival in Tobla, northern Italy. We will end the year with two special concerts in Lisbon and Madrid in November 2016.

Of course, apart from these concerts which are especially international attendances, the orchestra has planned that the concerts to be also shown to the Romanian audience not only in Bucharest, but also in other cities of Romania.