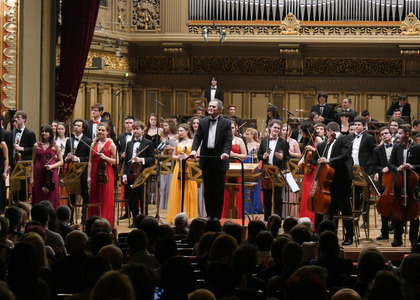 Monday, 1 February 2016 , ora 9.35
I consider that the fact that I like Romanian Youth Orchestra will not surprise many people. It is an assembly that I have been watching growing and blooming and every time I enjoyed discovering the same energy and unmarred pleasure of creating music. And I believe that I will not surprise anyone by saying that everything sounds absolutely when the conductor Cristian Mandeal is with us. They understand each other; they feel the music and offer the audience everything.

Thus, it has been a great gladness that we could be listening to them again, on 30th of January 2016, under the dome of the Athenaeum. The programme that the musicians have proposed was an accessible one, but with a few difficulties. The dominant line of the event was the lyricism. However, we could listen to fragments from famous works, and also very emotional instrumental moments. It all began with a Rossini overture, of the La Gazza Ladra opera and immediately continued with Meditation for violin and orchestra op.72 No. 5 by Tchaikovsky. The soloist was the violinist Rafael Butaru, one of the concert-maestro of the Romanian Youth Orchestra. It was a successful moment, followed by a vast Mozart moment. We listened to famous fragments from Don Giovanni and The Marriage of Figaro. The soloists were the soprano Paula Iancic and the baritone Şerban Vasile, two musicians that offered special emotional moments to the evening. Another important event where they were soloist was dedicated to the Carmen work by Georges Bizet. Until then, we listened to Stacato Dance by Grigoraş Dinicu and Carmen Fantasie for violin and orchestra by Franz Waxman. Within the last work, the soloist was Radu Dunca. He performed exactly and with involvement the score. In conclusion, I can mention that we have a great experience at the Athenaeum. The conductor Cristian Mandeal offered us more details at the end of the event.

How was the collaboration with two young soloists?

It was a very good collaboration due to the fact that they were very well chosen, thus I did not have a bad expectation, but a good one, and the pleasure and my delight was to present to the audience two members of the orchestra as great soloists. In general, this says something about the level of the orchestra, because among this people are very many young persons who can stay in front of an audience all by themselves and accompanied by this orchestra. Therefore, this is the level of the orchestra and is very good because once in a while this fact is being made public.

Will the same programme be presented on Monday in Brussels?

Yes, more or less. The same programme with different soloists, their own soloists, winners of the `Queen Elisabeth` contest, and we will also have a children choir at the end, with whom we will present two other works.

Will you also conduct at the Belgrade Philharmonic next week?

Yes, sure. Tomorrow morning I go to Belgrade and on Tuesday afternoon I start the rehearsals for Friday, when I will have a concert with them at the philharmonic.

What programme will you have?

A Serb composer`s symphonic poem, after which I have the concert from Lalo with Moser, a great international violoncellist, and at the end Mathis der Maler Symphony by Hindemith.