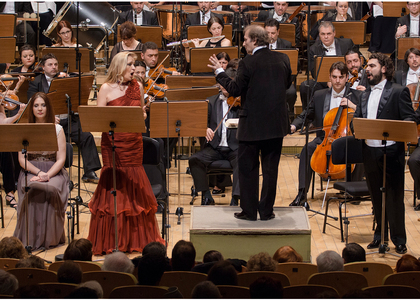 Monday, 1 February 2016 , ora 9.45
In keeping with the tradition, at the end of January the Radio concert season presented before the public an opera in concert, namely one of the works that are all too rarely performed in our country, La Favorita by Donizetti, with an exclusively Romanian cast, the titular role performed by the beloved mezzo-soprano Ruxandra Donose, whose appearances are always eagerly awaited by music lovers.

Although not one of Donizetti's better known works, it is an interesting opera for the performers, with several arias, duets, ensembles, choral and orchestral sections that give the artists room to shine, with delicate, but also dramatic score pages, put forward by the National Radio Orchestra and the Radio Choir (prepared by Dan Mihai Goia), together with the beautiful voices of the soloists, the entire performance being met with enthusiasm and thundering applause from the audience.

It must be pointed out that, under the baton of David Crescenzi, an excellent conductor with meticulous attention to detail and thorough knowledge of the bel canto style (among many), who is temperamental and constantly involved in attaining the proper expressivity, the orchestra performed with utter delight, and with the exception of a few mistakes from the wind instruments, their interpretation was impeccable, with wide range of dynamics and sound colors, achieving sublime moments, either of delicate transparency, or explosive and brilliant, developing the proper atmosphere for a (melo)drama with all the right romantic ingredients (the cello solo was superb). Also, the choir had a nuanced and harmonious sound, vivacious at times, and other times in an almost whispered, prayerful tone; there were, however, surprising attack synchronization mistakes and a slight unbalance (particularly in the men's choir). Overall, the performance was energetic, fluid and … full of life, which is proof that everyone tried to give their best interpretation in order to rise to the occasion.

Fortunately the cast was well balanced, with wonderful voices, mostly well directed, befitting their respective characters, with the outstanding performance of Ruxandra Donose, a delicate and pathetic Leonora, impeccably even and brisk, interpreting the famous aria in her original style, with perfectly integrated coloratura, which is also very difficult, and thus rarely performed appropriately. Although slightly reserved in the beginning, towards the end the vocal and expressive culminations were well highlighted, and she charmed the audience with her elegance and brilliant declamation, her melodic voice and her way of communicating ardent emotions, in keeping with the bel canto tradition. The role of her partner Fernando was played by tenor Cosmin Ifrim, who, in a happy turn of events, was invited for the first time in the Radio concert season, as far as I know, displaying a polished and wonderfully lyrical voice, compared to his performances in previous years, surpassing even the one he gave at the Vienna State Opera, with a remarkable accumulation in point of technique and all that makes a performance truly great, he successfully conveyed the dramatic moments, as well as the piano moments, mezza voce or "strong" falsetto, sung with confidence, with incisiveness, but also warmth, opting for a sort of diffusion of the high notes, which best shined towards the end of the opera; it was a revelation for most of us, who have been following his performances since his debut in the world of opera, and a pleasant surprise because of his technique, which recommends him as a soloist of great potential for difficult scores, that are reserved for lyrical tenors.

Also an auspicious event was the debut on this stage of the soprano Diana Ţugui (from the Romanian National Opera of Cluj), whose clear, luminous and supple voice simply shined, particularly in the canzone of the first act, interpreted with energy and purity, maybe a little too discreetly, but nonetheless appreciated for its tone color, (with the exception of one small hesitation), captivating the audience with her charm in the role of Ines. An unexpected surprise was the performance of baritone Şerban Vasile, who has demonstrated an aplomb and a roundness of declamation, which he was slightly lacking until now, to be honest, and also successfully tried the legato, his wonderful booming voice matching perfectly to the demands of the role of Alphonse, appropriate for his temperamental structure.

The famous bass from Craiova, Sorin Drăniceanu, once again delighted the audience with a thundering voice, an impeccable approach to the ample score, and a sound worthy of the role of Baldassare (with the exception of the questionable low notes in his opening lines), massive and … equal to himself. As for the tenor Liviu Indricău (from the BNOH), his was a very convincing Don Gaspar, with a heroic and metallic sound, which never goes unnoticed, though lacking in expressive nuance (and intensity) particularly in declamation.

The numerous ensembles were harmonious and balanced, as well as the interpretative and resonant rapport between soloists, and their work with the orchestra and the choir was precise and efficient, even if they were at times overpowered by the orchestra. On the podium, with energy and dedication, David Crescenzi has proven once more that he is an excellent opera conductor, passionate and strict in equal measure, and both the choir and the orchestra truly matched his demands, so that the large and enthusiastic audience showered them with applause, a much deserved reward for a special artistic achievement turned into a real event, not only because this opera is almost never performed here, but also because it was oftentimes even superbly interpreted, with great attention to detail.