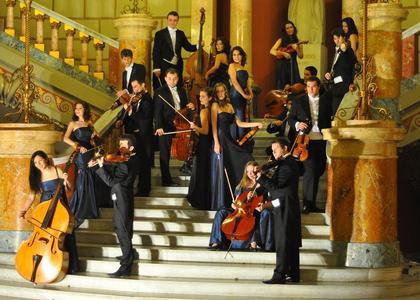 The Royal Camerata on the stage of the Romanian Athenaeum

Thursday, 10 March 2016 , ora 11.46
The Royal Camerata, the ensemble which enjoys the patronage of His Royal Highness, Prince Radu of Romania performed a Royal Season concert on the stage of the Romanian Athenaeum, yesterday, on 9th March 2016.

The programme was devised in an attractive manner for the audience, who was proposed a musical journey over the time, starting with baroque, and with the romantic époque as a final destination. Therefore, the first presented work was Concerto for four pianos and orchestra in A minor by Johann Sebastian Bach, an arrangement after Concerto for four violins and orchestra in B minor by Antonio Vivaldi. The works for four or more pianos are, in fact, a rarity for the Romanian musical stage; moreover, in this case, the concert was put together by four very young artists. Aged 14 to 16 years old, Izabela Voropciuc, Gerard Rusu, Egizia Soare and Yosua Stan are students of Réssonance Foundation, still perfecting their skills, students who step with enthusiasm towards something that can become a piano player career in all its entireness.

The Viennese classicism was present through the Concerto for two pianos and orchestra in E flat major by Wolfgang Amadeus Mozart. Performing as soloists were Lavinia Dragoş, director of Réssonance's Romanian branch and Spanish performer, Pilar Guarné.

The protagonist and, it may be, the most awaited presence of the night, piano player Elizabeth Sombart joined the ensemble in the second part of the evening, during the performance of the romantic époque with the Piano Concerto No 2. from Frederic Chopin's creations. Elizabeth Sombart is the founder and director of the Réssonance Foundation and has a close musical bond with Romania, since she is for the second time on the Romanian stage alongside the Royal Camerata members.

Even from the moment of the programme's selection, the success of the event was, mostly secured. Characterized by diversity, melodic beauty and coherence, at the same time, the chosen opuses have succeeded to seduce the music lovers present at the concert:

"I really enjoyed that such a concert was made, with this type of music, with this orchestra, with youngsters who are supported. The programme is beautiful, there is a big happy crowd…" (a female spectator)

"I really liked it and that is the reason I have come and will come, because I like it. It is an extraordinary event." (a female spectator)

The three works have been conducted from the music stand by Pierre Vallet, a disciple like Elizabeth Sombart of maestro Sergiu Celibidache. The conductor has shared some of his impressions about his first collaboration with the musicians from the Royal Camerata:

"It was fantastic! Firstly, it is about an exceptional love for music. There was no routine for them, they were very careful with the details. As for the concert master, Radu Chişu, he is incredible. He works detailed, he supports me, I have listened to everything he has told me, we have talked; he is very attentive. It can be seen that here music is still very alive, but, especially, that it has a true value. For me this is an extraordinary thing. I have seen the quality of the musicians and the ensemble; they look at each other, they look at me, we communicate…In this way, a truly unique feeling of harmony was created."