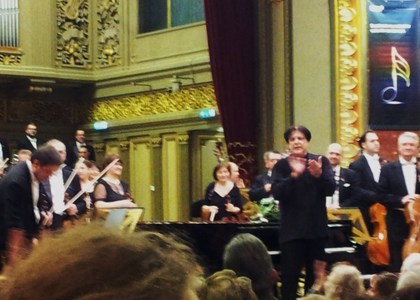 Friday, 8 April 2016 , ora 12.37
No matter how reluctant you are, when you see a poster with three concerts for piano interpreted by a single person, you say it is a very courageous act, made by having a lot of confidence in your own strength. When the before-mentioned pianist doesn't want a conductor beside him, "the experience" of such a show seems even more unusual; and when the name from the poster is the one of an artist in his 60s who has started his international carrier at only 19, when he took over the Tchaikovsky contest, then you're definitely even more curious!

Thursday, on the 7th of April, on the stage of the Romanian Athenaeum in one of the shows included in the Lipatti Nights event, Andrei Gavrilov had a concert, being a true legend of the sovietic pianistic school, a great virtuozo, a nonconformist...He's obviously an artist who lives the interaction with the audience and music at their fullest. Rahmaninov 3, Prokofiev no.1 and Ravel- Concerto for the left hand- his options reunited on a single poster, the pianist also conducting the Orchestra of G. Enescu Harmonium ! It was definitely the intention to be a...One Man Show ! What we listened last night at the Athenaeum was an excelent One Team Show ! An extraordinaire effort of everyone on that stage to win us over through the musical expression of the extremely well chosen sheets, a feeling of explosive energy, of passion and artistic involvement, of vibration with the music ! The Engine (or more correctly said, The Rocket) Andrei Gavrilov (with his incredible courage to suggest this audio experience to the Bucharest Harmonium) has found a very cooperative simphonic band whose members adapted perfectly -aural and visual- creating a truly romantic or modern wibe, depending on each sheet, on the lirical flow or a spectacular fluency !

From the point of view of Andrei Gavrilov, this project was « A classic way of moving- during four days- from slavery to cosmic freedom ! »

For the orchestra- in the name of whomLiviu Câşleanu has spoken (the evening's concerto-maestro) - it was « a huge responsability. After the first rehearsal, we realised we must do something ; we started communicating with him...and viceversa ! Andrei Gavrilov isn't a conductor, he is first of all a great pianist who also wanted this experience of conducting. He's a great musician ! I hope the audience was happy and thrilled by such an interesting experience : three concerts in one evening, all different genres...It was an enormous quantity of concentration and implication. You do it anyway, but somehow, when you have both a conductor and a solist, it's different...Now there has been only us, the communication was direct, we were completely discovered...I CAN'T tell you how we felt!

In the room there was sent this extraordinaire communication of the Romanian musicians with the guest in front of the piano and the spirit of the jazz liberty which he showed now and then made the orchestra to participate at its fullest. It was like the instrumentalists were « in alert », in a real tension...waiting for each other, truly getting into the mood, the rhythm, joyfully, playing with the same energy as if each of them would have played an individual chamber song. This mobilization, the interpretative energy which formed around the pianistic "volcano" named Andrei Gavrilov went beyond the stage, reaching the audience who applauded frantically thanks to the moment's impact, to the force of the musical expression which got all of them!

I left the Athenaeum with the feeling that I've had a genuine artistic experience, one of those that charge your soul and which-beyond the imperfections that the critical spirit sees-cheer you up and enrich you...