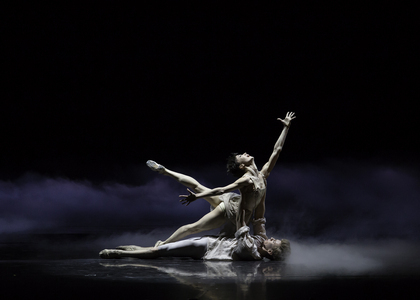 Friday, 8 April 2016 , ora 12.47
...which, after I've seen it, I realized I've been waiting for a long time. Such a production certifies and legalizes the quality of a ballet group: if you have this Manon in your show, it means you are part of a different league, the proffesional one of international level, the first hand ballet companies, the top lirical theatres. It is what the Danish dancer and choreographer Johan Kobborg proposed and succeeded, whose name is very important, for many years, for the ballet contemporary history and who, since December 2013, trains the dancers from the National Opera in Bucharest.

Even if in 2014 the Manon ballet had his 40th anniversary, it is shown for the first time on a Romanian stage. A true revolution in a repertoire dominated by Swan lake, Sleeping Beauty, Giselle...the "old" classic sheets that are so loved by the audience. Since the dancer and the choreographer Johan Kobborg is in charge of the ballet company of the Bucharest National Opera, coming straight from the Covent Garden, everything changed for the better, from the dancers' quality to the repertoire that it is enriched and diversified spectacularly. Until now, nothing matched this Manon's complexity, a romantic ballet to his core, accompanied by the music signed by a famous composer, French Jules Massenet (the original arrangement of Leighton Lucas reorchestrated by Martin Yates) and with a subject powerfully veridical. A tragic story, the one of young Manon, who goes very fast on a dangerous path from the 16 years old young lady, pure and naive, to the greedy and extravagant woman who sells her body to the higher bidder and who lives a miserable life. The characters require the dancers to be not only technical virtuosi, but also to play a true theatrical play, with intense and sincere emotions, very distant from the conventional mimicing of a classic ballet. Manon and Des Grieux are being passionate on the stage, burned by feelings of love and despair, and the audience, only through acting and music must be overwhelmed by the action. The legendary choreographer has seen this ballet as a...movie, with endless well personalised actions which compose an overall paiting of a mixed and corrupted society. As usual, I tried to follow the solists' dance, but all that was happening around me, movement...movement...a diverse, real movement that is an obligatory piece of a whole, made me watch everything ; of course, a failed attempt that makes me want to return to this show once more, maybe twice...to see the « movie » Manon in all of his complexity. It is worth it. The art of Sir Kenneth MacMillan is not easily discovered, the joy of the one who perseveres being even greater. Especially that also the dancers whom we watched in the premiere's evening turned to be perfectly ready for performance. Their effort must be appreciated, and the success- a clean, aesthetic show, worked to the littlest detail, something that, for the audience, flows naturally from the first to the last minute of the almost three hours of the show. A premiere is both an ending and a beggining. During time, when the emotions and the fears will wear off, when the concern for the technical element won't be so visibly obsessive and the dancers will allow themselves to relax, turning into a real Manon, Des Grieux, Lescaut and all the characters involved in the action...the show will only win. It is progress that I truly consider possible for Marina Minoiu (Manon), Dawid Trzensimiech (Des Grieux) and Henry Dowden (Lescaut). Flawless and spectacular in the so-called episodic parts, Akane Ichii (The mistress), The head-begger (Shuhei Yoshida), Antonel Oprescu (Monsieur GM) and Gigel Ungureanu (Jailor).

This show has also been a major challenge for the ballet dancers. Each dancer has a part in the story, parallel stories are being told on the stage, parallel actions are happening. Broken into thousands of pieces, the mirror hardly gathers her chips that are scattered everywhere, each of them reflecting a different fragment from reality. When they play their part, the dancers become real characters, but when they play a group role, their coordonation is far from being perfect. The ballet maestro still has a lot to work in this area. For me, the wonderful surprise of the evening was the orrchestra of the Bucharest National Opera, the instrumentalists who have played like never before, a song both splendid and difficult, especially with his opulence and drama. A friend of mine told me The conductor sanctify the orchestra ! It couldn't be more true. I bow to you, maestro Martin Yates !

PS: I won't comment the unfortunate incident due to whom the maestro Johan Kobborg might leave the Bucharest National Opera ballet. It seems to me that I'm living a nightmare that in any time now I will awake and see for myself it isn't true.

Worldwide premiere: the 7th of March 1974, The Royal Ballet in Londra

Premiere at the Bucharest National Opera- national premiere: the 2nd of April 2016