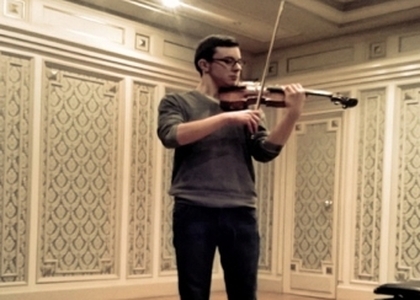 Wednesday, 20 April 2016 , ora 10.06
On April 19th 2016, two students of the National University of Music of Bucharest performed for us in the limelight of the Tuesday Evening Season: the violinist Andrei Mihail Radu and the pianist Bianca Măriuca Popa. The two young artists have an impressive list of honors received at national competitions, and although the two instrumentalists are only at the beginning of their musical careers, they have demonstrated remarkable maturity in their musical performance. Clearly touched, the violinist Andrei Mihail Radu made a statement on this matter, at the end of this demanding recital:

"We began with Mozart, a classical sonata, after which we turned back in time to Paganini, then Bach, and then to the Romanian music of the 20th century with works by Jora. This was followed by Prokofiev's sonata for solo violin, a clearly defined composition in the style of Mozart, tonight's performance ending with the Lute Player from George Enescu's suite, Childhood Impressions".

We noticed a very good communication between the violinist Andrei Mihail Radu and the pianist Bianca Măriuca Popa, even though they are at the beginning of this interpretative formula, the two artists complement each other in their artistic performances, which is why we have asked them to describe each other's personalities:

"I can say that she is a very good pianist and I am honored to be accompanied by her. We understand each other very well, and hopefully this was also visible for the audience tonight... that we were excited, honored and glad to be on this stage." (Andrei Mihail Radu)

"Andrei is a very talented young man, with many qualities, and his joy of playing music is evident… he is very expressive and, naturally, this collaboration gives me great pleasure, and I hope that many more wonderful things will come in the future, as well."

The violinist Andrei Mihail Radu and the pianist Bianca Măriuca Popa have presented the public with a recital marked by youth and passion, with a rich, but challenging repertoire. As mentioned previously, the two artists are at the beginning of their careers, their technique must be refined, their sound polished, but with the guidance received at the National University of Music of Bucharest - Andrei Mihail Radu is studying under violinist Ladislau Csendes, and the pianist Bianca Măriuca Popa is studying under the renowned pianist Dana Borşan - there is no doubt that their future performances will develop in an ascensional trajectory.