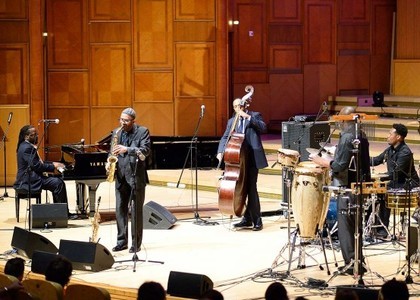 Friday, 22 April 2016 , ora 10.38
There are voices which claim that jazz is the sound of the American democracy. A plea about this subject has been made during a luxuriant show by the saxophonist Kenny Garrett, alongside his four brilliant team members, on Thursday, 21st April 2016, at Radio Hall. Through this contemporary Charlie Parker's eyes we see that in democracy, virtuosity can reach limits situated beyond the normal, that one can travel with the help of music from the United States of America to Tibet, Brazil and in the Caribbean, that it is important to participate… towards the end of the show, after twenty minutes into the show Kenny Garrett asked for the lights to be turned on in the hall, so that he could see how the Romanian audience looks like and nobody reacted… and through his eyes we see something apparently more important: the fact that music has huge spirals to make us happy. "Are you happy people?" Kenny Garrett asked us at the end of the show in a frenetic collective improvisation - musicians and audience, singing and dancing on the rhythms suggested by this impressive entertainer.

"Sensor" and Lucas Molina opened the show organised by Jazz Syndicate Live Sessions - we acknowledge their unpleasant task of being associated to Kenny Garrett Quintet, which has presented its last album in Bucharest: "Pushing the world away", nominated at the Grammy Awards, diverse as structure, a post-bop album as it has been called, pushed to its very limits, obvious in the first two songs (true perpetuum mobile with free accents), however, a post-bop which melts in charming bossa-nova rhythms, in a resounding travel worthy for a Buddhist representation, reaching out to soul, salsa and the extended ending, more precisely, "Happy people", an older song of this American saxophonist, directed in the style of Haydn's Farewell. One by one, the artists left the stage while the music continued, the last standing, Kenny Garrett finished with a vocal improvisation like Bobby McFerrin…and then the light turned on!