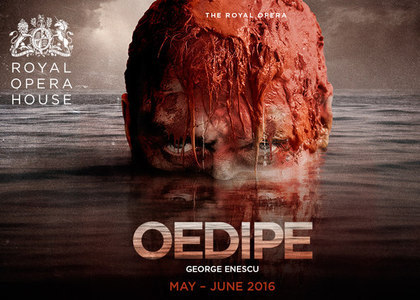 First impressions of the premiere of the Enescu's opera, Oedipe, in Great Britain

Tuesday, 24 May 2016 , ora 9.55
With Danish star Johan Reuter in the leading role and a cast that includes Sir John Tomlinson, Sarah Connolly and Sophie Bevan, the Royal Opera Covent Garden's "Oedip" that is conducted by Leo Hussain, is the first staging of the troubling masterpiece of Enescu in Great Britain. The show that is being performed on the 23rd of May 2016, is a production that goes back in 2011 when the directors Àlex Ollé and Valentina Carrasco, two of the members of the visionary creative group La Fura dels Baus from Barcelona, created this show for the Théâtre in Monnaie, Brussels. Oltea Şerban Pârâu wittnessed the London premiere and told us more:

Yesterday it has been an historic event at the Royal Opera Covent Garden in London- the premiere of Oedipe in Great Britain, in London, on this symbolical stage that is Covent Garden. The show by Àlex Ollé and Valentina Carrasco was taken from the La Monnaye Theatre in Brussels, where there was a premiere in 2011, and will be performed again in Paris, this fall. Indeed, it is a production that shocks from the very beginning, it is very powerful from the emotional point of view and at the same time, leaving aside the vizual montage, the music choice is extraordinary. Leo Hussain was the conducter who performed for the first time on the stage of the London's Royal Opera. He also participated at the "Enescu" Festival in Bucharest and he will come again in September to the Radio Festival, conducting the Radio National Orchestra. He is an artist who is very familiar with Enescu's music and who managed to show the deep meaning of Enescu's works to the wonderful orchestra from Covent Garden.

Something that is important in "Oedipe" and could explain why it wasn't so often performed in the past decades is the fact that if it's not well played, you can barely entertain the audience.

We were facing a production which was very well played, both the orchestra and the choir made an extraordinary show, the latter being basicaly the second leading role of the opera. They were the perfect foundation on which the solists could create. As for the solists, the Danish bass-bariton Johan Reuter who plays Oedipe for the first time, has made an great job, both vocally, but especially as an actor.

The room was filled with people and the applause lasted very long. It has been a success at Covent Garden, just like I've seen concerning other music genres, because I had the opportunity of participating on premieres. Besides, the artistic manager of the Opera, Kasper Holten, was thrilled that 80% of the tickets for the next five shows were already sold, which is extremely rare before reviews to even appear.

I'm curious what will be the reaction, because it is music, a production which will start comments for sure. It is not easy to digest, but considering that "Oedipe" is not a show where you come to relax, like most great masterpieces of the 19th century, I think that the Covent Garden show makes you interested, that puts questions and seeks answers that are never the same. This opera will be recorded by BBC Radio3 on the 4th of June when they will also broadcast it and when it will also be taken by Romania. Therefore, from the audio point of view, at least, the radio will acquit itself of the duty of bringing this opera into notice.