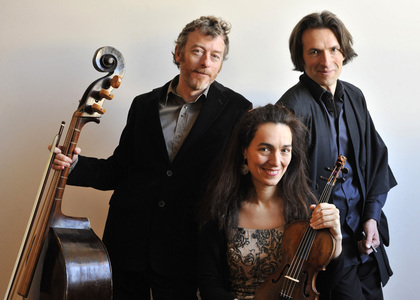 Ausonia ensemble in concert in Brussels

Tuesday, 31 May 2016 , ora 14.55
On the 30th of May 2016, the concert room of the Royal Conservatory in Brussels welcomed the members of the Ausonia ensemble, founded in 1998 by the violinist Mira Glodeanu and by the clavecin player Frédérick Haas. The two were also solists in the programme dedicated to Johann Sebastian Bach which included the Concertos BWV 1041 in A minor and BWV 1042 in E Major for violin and the Concertos BWV 1052 in E Major and BWV 1053 in D minor for clavecin.

I consider that the fluidity and grace which coexist with a rigour of spirit and rhytm, the capacity of staying airy even when it gets crowded, the slow parts which function as a magnified sample to help you hear better the things which fascinate you in the fast moments and which you can't catch, all of these define Bach's music.

There were features whom I immediately found in the Ausonia's interpretation, but quite shadowed by the tonetic imperfections, unexplainable at a ensemble that is clearly accustomed to play together, to breath together, to attack and conclude simultaneously in an extremely natural way, to build phrases by giving unthinkable meanings even to those melodic lines which you thought you'd know them well, to subtily grow the intensity during the same note, to think music in the same way and to lead it in the same direction.

The concertos for clavecin, always followed by a violin one, kept the original placement, therefore the main instrument had to also play from the less privileged position of that of the continuous bass, somehow redrawn in relation to the five or six stage coleagues. Therefore, the clavecin seemed a bit lost behind the more vibrant sound of the violins and in the room, you heard the undersong rather than the solo voice- altough it was an exquisite accompaniment, very sensitive, plastic with every strike of the bow, complimenting and completing the wonderful protagonist.

I didn't listen very often Bach's concerts as he wrote them, meaning for the clavecin; I took advantage of the opportunity given by the presence of the Ausonia ensemble to make a comparison with the modern version, backed up by a piano. In my oppinion, the composer wins tremendously in this second aspect; it seems to me that at the clavecin, the height differences are not that easily percepted, therefore the song remains somehow hidden, while the sound atomization, the notes' quality that are being interpreted in order to remain distinct and when close frequences come one after the other, it all makes that the richness of information and beauty, be it at the melodical or harmonical level, to be emphasized on the piano. But it could be the "fault" of the modern ear and the accustom of always listening Bach's music played by this instrument that is capable of an infinite expresivity and that can react to almost insignificant impulses.

The latest Ausonia album includes the Bach programme presented on the 30th of May 2016 at the Brussels Conservatory and the fragmets during the rehearsals which we watch after the concert sound very well. Therefore, the ensemble remains at the known height, from the quality point of view. Frédérick Haas and one of the ensemble's guests, the theatre actor Masato Matsuura, will perform in a few days, on the 4th of June 2016 in France and again at the end of September.