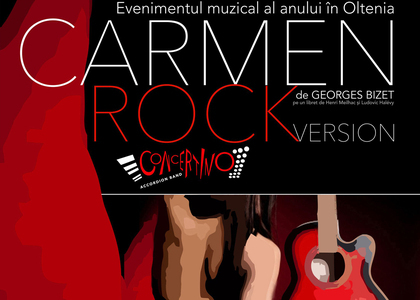 'Carmen' by Georges Bizet, in a rock version, at the Romanian Opera in Craiova

Tuesday, 31 May 2016 , ora 16.02
In the last Sunday of May, I went to Craiova to see the latest production of the Romanian Opera in that city- Carmen by Georges Bizet, in a rock version. A surprising and challenging reinterpretation which basically worked- the hero turned from the passionate gipsy of Prosper Mérimée into a dominatrix from a bad neighbourhood- thanks to the theatrical vision of Antoniu Zamfir, the manager of the Romanian Opera in Craiova, and his team. "I invited this Concertino band from Chişinău whom I saw at a TV show on a national television, whom I appreciated their artistic interpretative qualities and I wanted to do a project with them. Well, they interpreted in a more or less rock way a collage from Carmen by Bizet and that's when I had the idea to do this montage with an atypical orchestra for the opera for the first time in this country. I pictured Don Jose to be just as I think he was planned to be even by the composer and the librettist. He is a character who wants to love, who doesn't know how to love, who betrays Micaela's love and who must pay, being betrayed by Carmen. Escamillo could never picture him being anything else, but classical. But the directing idea came from the fact that this rock community is sometimes bad seen and I tried to gather on the same stage the community of rock fans with that of law, the cops whom I imagined and, why not, with the art world, the classical world, the Spanish dancing...so that in the end, with that entrance towards the bullfight by all of us...to go on the same road towards the bullfight, to show that when there is understanding, all communities can coexist."

I particularly liked the decor and the costumes made by Răsvan Drăgănescu and for the solists, by Cătălin Botezatu- lots of black leather, same colour jeans, chains, tatoos, T-shirts with different messages, edging, punk hairdos- summed up, everything you would expect to see when you say rocker. The scene was dominated by a series of high and square columns, wanting to be a puzzle, where each side that was differently printed was either a red curtain or helped creating the athmosphere of each act. As a bonus: two Harley Davidson motorcicles which went on the floats on the front stage, some graffitti, and even dogs in the end, waiting for the curtain to drop, three gorgeous horses. The Serbian mezzo-soprano Ljubica Vranes, in the leading role, started her performance being dressed in leather dresses and shorts, long boots with red shoelaces while dominating the stage, being appropriate vocally for Carmen. Beside her there were the tenor Bogdan Zahariea- a Don Jose who resembles Alagna fizically and vocally, but who struggled too hard, pushing the sounds and forcing himself- perhaps in fear that he won't be heard, him singing outside? But I appreciated a beautiful French pronunciation of Bogdan Zahariea whom I didn't found unfortunately in Ljubica Vranes' interpretation and neither in the one of the soprano Renata Vari, the latter being nevertheless very convincing vocally and theatrically playing the role of an inocens girl. Escamillo was played by the baritone Ştefan Ignat, a guest from the Opera in Bucharest. You could hear in other roles:

The CONCERTINO Accordion band was excellent, being conducted by Marius Hristescu who also made the arrangements for this ensemble of accordions, bass guitar and electric violins and percussion. Generally, the arrangements respected the original sheets by Bizet, the accordion sound being especially appropriate for the lyrical moments.

For those who have been to rock concerts before, the experience have been a very familiar one: the show has been outside at a late hour- it started at 21:30 to emphasize the spectacular light effects. There were a couple of hundreds of seats in a crammed space that was guarded by the police, those without a ticket or the guests-and they weren't few-being allowed to watch the opera from a distance. The Mihai Viteazu Square in Craiova was filled with spectators, those who were too far being able to see on the two giant screens put on the left and on the right of the stage.

Congratulation to the Romanian Opera in Craiova for its boldness and courage! Even if the show had some difficulties- the main one being with the sound- the large number of spectators who stayed until the end shows that this kind of approach- a mix of elements of the high culture with the so-called "pop" one (in our case, obviously, rock!) can be the solution of drawing the audience towards the Opera world.