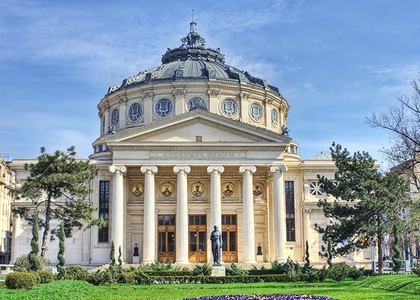 Reportage - Parsifal at the Romanian Athenaeum

Wednesday, 22 June 2016 , ora 13.55
On 22th June, at 11:00, a press conference entitled Parsifal at the Athenaeum took place in the Small Hall of the Romanian Athenaeum. The spokespersons for this event were conductor Christian Badea, the president of the Romanian Foundation for Excellence in Music, Andrei Dimitriu, the general manager of George Enescu Philharmonic, Azamet Zhangulov, senior vice president of KMG International and Radu Boroianu, the president of the Romanian Cultural Institute. The event was hold in order to announce the gala of the 2016-2017 season at the Athenaeum - on the 7th and 8th October, the entertaining concert of the first act from Wagner's drama Parsifal can be listened to and seen. George Enescu Philharmonic Orchestra and Choir and maestro Christian Badea can be seen performing alongside present-day important performers of Wagner's works, like Stefan Vinke, the one who will breathe life in the title part, but also Eric Halfvarson, Petra Lang and Bela Perencz. They will also be joined by Romanian soloists. This new Parsifal comes after the positive feedback of last year's project, when the audience could listen to the third part of this famous work. Andrei Dimitriu has announced the Philharmonic's desire to perform the whole work next year, near the Holy Week.

Conductor Christian Badea said that the idea of the project came from the desire to stimulate the preservation of the cultural values and for the establishment of a Wagnerian tradition in Romania. It is important to know that the guests will hold perfecting courses for the Romanian artists who desire to learn. We will find out right now from conductor Christian Badea himself, why he has chosen Richard Wagner's music and George Enescu Philharmonic Orchestra.