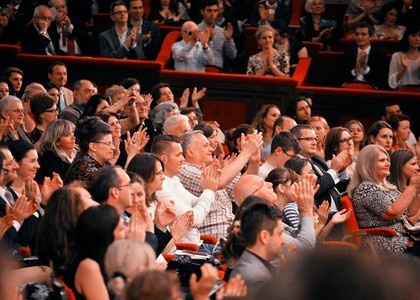 The International Contest 'George Enescu' of 2016 has begun

Monday, 5 September 2016 , ora 10.54
The International Contest 'George Enescu' of 2016 started with a gala concert by the "George Enescu" Harmonium whose solists were actually the contest's winners.

The International Contest 'George Enescu' places Romania among the most representative ones from the entire world, culturally speaking. A contest of such a range gives us a special energy and shows us the future's chances through art. Thanks to this contest, to music, Bucharest becomes part of the international competitions' world.

And so the speech by Corina Şuteu began, her being the minister of Culture, given on Saturday evening on the stage of the Romanian Athenaeum by Lucian Vărşăndan, state secretary in the same ministry. The opening concert of the International Contest 'George Enescu' had a very large audience. Figures from the Romanian and international musical world, Romanian officials and music fans took part to the first show of the contest which this year had a record number of signed up musicians- 317 young artists from 48 countries.

The solists of the concert that was held by the "George Enescu" Harmonium's Orchestra, conducted by Horia Andreescu, were actually three of the former winners of the "Enescu" Contest. The violinist Anna Ţifu, the cellist Valentin Răduţiu and the pianist Mihai Ritivoiu performed with the aforementioned ensemble Triple concerto op. 56 in C Major by Ludwig van Beethoven.

"The participation is very important. Those three can perform on any stage of this world. That's when we realize the value of Romania. The organisation is spotless, as if we were during the festival."

"The atmosphere is impressive! It's good that every year something is happening in memory of Enescu."

In the room were also present two of the members of the "Enescu" Contest's jury: the cellist Alexandra Guţu... "The Triple by Beethoven was wonderful because I've seen three young people who have met today and created some colourful music. I'm happy to be here."

And the cellist Marin Cazacu… "A concert is challenging for the performers, for the audience. And I had the opportunity of listening three young Romanian people, even if they are not all born in Romania, which I liked very much. They played beautifully, expresiv and we were all thrilled to hear them. Behold, the future is ensured by their presence on the concert stages!"

Part two of the evening at the Romanian Athenaeum also continued with a winner of the "Enescu" Contest. The Bucharest Harmonium's Orchestra performed in premier the work entitled "Tektonum" by Sebastian Androne, the 2014 edition's winner at the composing section. Exactly this opus one of the ensemble's members talked about, precisely the flutist Ion Bogdan Ştefănescu: "It is an extremely complex work. It's the youth's advantage because I think he put in it all that he knew at that time when he wrote it. It is a really spectacular work and you could see that it had an extraordinary success among the public. It's a great accomplishment to be shouted Bravo! so many minutes to contemporary music. He's a really talented boy!"

The Symphonic Poem "Pini di Roma" by Ottorino Respighi ended the night at the Romanian Athenaeum, one of celebration and emotional at the same time, as the cellist Valentin Răduţiu said:

"There is a different charge in playing in the opening of a contest than in a regular concert. And it is my connection with Romania, with Bucharest, parents and audience, the city where my father studied in...and performing a special part in a concert with the Harmonium...so, yes, it has been an emotional evening."

The International Contest 'George Enescu' lasts until the 25th of September. Today, the competition for the cello section continues, being signed up 53 musicians. The violin section comes next with 56 performers and the piano section with 53 young artists. There are also programed during the International Contest 'George Enescu' other 18 recitals and concerts performed by former winners and members of the jury.