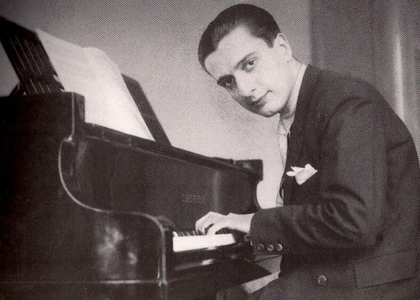 The 'Dinu Lipatti- Restitutions' Project Ends at New Europe College with the Launch of the new Site dinulipatti.org

Thursday, 13 October 2016 , ora 9.24
Starting from 17.00 the last conference of Mark Ainley takes place and is dedicated to Lipatti in a series began in 6th of October.

Dinu Lipatti, probably the most well-known and beloved Romanian pianist has its own online "home" starting from this afternoon. You are all welcome to access the site www.dinulipatti.org, where we strive to offer answers to any question related to his life, work and posthumous destiny of this artist that even after 66 years from his premature death still has admirers from all over the world.

An article signed by Grigore Bărgăuanu, his most skilful biographer, contains Lipatti`s life, chronology, all his recordings, his compositional work on genres, chronicles dedicated to his meetings with the audience, quotes about the artist but also quotes of the artist. You will also find out who was the musical critic in chronicles signed by Lipatti but also in comments of these chronicles, who was the professor but also the photographer Dinu Lipatti- all in Romanian, French and English versions.

Personalities bound affectively and professionally to Dinu Lipatti have contributed with articles to this site and through decades of activity, musicologists and internationally known researchers like the remembered Grigore Bărgăuanu, Mark Ainley, Viniciu Moroianu, Vlad Alexandrescu, Ana Maria Orendi or Oana Velcovici Rădulescu. Premier topics are discussed like Dinu Lipatti in the CNSAS archives, an article signed by Vlad Alexandrescu.

In the media zone- a wide gallery with pictures of and made by Dinu Lipatti, his radiophonic interviews in French and video recordings from all the "Lipatti Days" editions till present time.

Here`s the dinulipatti.org from Bogdan Dragomir`s perspective who was responsible for the creation of this site:

"A part of our creative time we`ve spend it this summer working for Lipatti. It was very pleasant, the things have settled down step by step, we weren`t in a hurry and some decisions came by themselves right now, before we finished. For example the orange titles that give a warm and pleasant colour to the site in correlation with the cream-coloured background. Also, the noble discrete violet from the lower part of all the pages is a recent adjustement or the graphical and technical solution for turning over the scores. It`s a complex, brushy site with diverse materials and especially a growing one. Now it appears to be full because all the pages are full of contents- and are not less. Today the site has 600 pages and 260 articles translated in three languages and grouped in 43 sections.

There is a lot of material and will be even more as soon as our team will get another text or audio-video contents for example more scores of Lipatti`s work. The site is built in order to develop easily and if problems will appear we will help you out."

dinulipatti.org- a monography in images opened of course to the future enterprises that include the great musician Dinu Lipatti who we will celebrate a century from his birth in 2017. It is a project made by the Opus Association and financed by the Ministery of Culture.

The inauguration will take place today at 17.00 at the New Europe College from Bucharest with the occasion of Mark Ainley`s last conference about Lipatti of the series opened in the 6th of October. At the launch of this site will speak the musicologist and the academic PhD professor Valentina Sandu-Dediu, rector of the New Europe College, academic PhD professor Vlad Alexandrescu and Oana Drăgulinescu, musicologist and expert in communication.