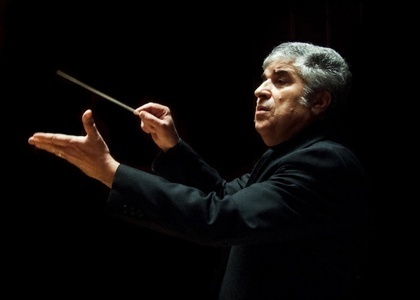 Thursday, 20 October 2016 , ora 10.56
A new concert of The Romanian Radio Chamber Orchestra took place on Wednesday, 19th October 2016, in Mihail Jora Concert Hall. But it wasn't an ordinary concert because the whole evening had a festive atmosphere. This was on the occasion of the 65th birthday of the orchestra leader, Cristian Brâncuşi, one of the musicians who often conduct this Romanian Radio choir, but also to celebrate 45 years of being a conductor. The event began with 'Andante and Rondo Hungarian for Bassoon and Orchestra in C minor, Op. 35' by Carl Maria von Weber, an opera with a jovial touch, but also latently melancholic. The soloistic part went to the bassoonist Adrian Jojatu, an artist who carries out his musical career mainly in the United States of America, where he works as a teacher, but also in the orchestra, chamber bands and solo. After this pleasant introduction, we listened to 'Concertino, Op. 47 (Solo Clarinet, Solo Bassoon and Chamber Band)' by Franz Danzi. Clarinetist Emil Lancea also came to the stage to introduce an opus as jovial as the one in the beginning, together with the ones who were already on stage.

The second part of the concert has taken a more sober turn as we listened to 'Missa in tempore belli' ('Mass in Time of War'), Joseph Haydn's most important piece. The lead singers were the soprano Cristina Oltean, the alto Geanina Munteanu, the tenor Tony Bardon and bassist Critian Hodrea. The Romanian Radio Academic Choir, conducted by Ciprian Ţuţu, also came to the stage. This piece was a pleasant ending to a great night.

The musicologist Grigore Constantinescu paid maestro Cristian Brâncuşi a tribute and a distinction for his entire career:

'The lead conductor of the ensemble has proven his devotement towards this orchestra that he has conducted since 1990. Highly appreciating his forty and a half year career as an orchestra leader, on the occasion on the conductor and composer Cristian Brâncuşi's 65th birthday, the Union of Music Critics 'Mihail Jora' decided to grant the maestro the great title of excellency - Master of Music.'