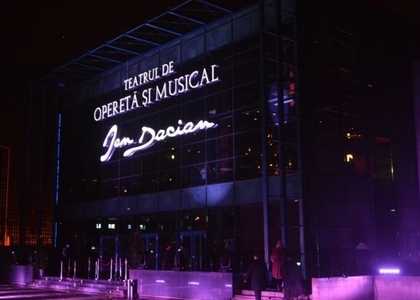 Thursday, 3 November 2016 , ora 9.49
The press conference regarding the 'Ion Dacian' Musical and Operetta National Theatre from Bucharest took place from 11 a.m. in the lobby of the Bucharest National Opera House. There were discussions about the operetta theatre's hall condition, the institution's future, forthcoming projects and artistic programs. At this conference attended Beatrice Rancea- the Interim CEO of the two institutions, Corina Șuteu- the Minister for Culture and Bianca Ionescu, Deputy Director of the National Opera House. There were mainly talks about the new headquarters for the Bucharest Operetta Theatre, opened pompously about two years ago, on the 25th of December 2015, when it premiered with Andrew Lloyd Webber's musical, 'The Phantom of the Opera'. Today this center is not used and it will remain this way despite the repeated actions taken for it to be reinstated. The multiple illegalities are the reasons why this is happening, such as: the land on which the headquarters was built on, the hall which illegally opened for a few performances, the construction that at this moment is simply a site and that cannot obtain the approval needed to operate, the amount of 11 million Euros with VAT, offered by the Ministry for Culture to the previous management that was in charge of the two institutions ( National Opera House and Musical and Operetta Theatre) , an amount that was transferred without any auction being held, into a Dutch entrepreneur's bank account, who was in charge with the headquarters' construction. All these illegal actions had been searched by the Control Body of the Prime Minister and the synthesis of this report- as Corina Șuteu informed us- will be made public on the Ministry for Culture's website. In conclusion, this headquarters doesn't have an approval and cannot be used until a verdict is issued; the process that would put the operations into motion hasn't started yet. There are also attempts made in order to administratively separate the two institutions opera- operetta.

However, to continue the operetta theatre's activity, artistically speaking, there were rented rehearsal rooms and also a festivities hall from the Palace of Parliament, where the first performance will be held- a premiere of the operetta 'Die Fledermaus' by Johann Strauss, scheduled on the 30th of December. The show will be conceived by the director Matteo Mazzoni, the one who also works at the future premiere of the opera ' Il barbiere di Siviglia' by Gioachino Rossini. Starting from January 2017, in this festivities hall from the Palace of Parliament, shows from the 'Ion Dacian' Musical and Operetta National Theatre will be performed weekly.