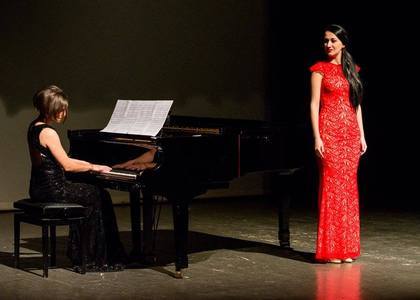 Wednesday, 9 November 2016 , ora 13.37
On the 8th of November the Small Auditorium of the Romanian Athenaeum hosted the second vocal recital from the Season of Tuesday night, season 2016. Soprano Bourceanu Mădălina Gabriela presented a program of vocal miniatures, starting with a German and French lied continuing with Romanian and Russian creations and ending with Iberian sounds. I loved the tonality of her voice and the maturity with which she understood and approached the lied. 24 years old Mădălina Gabriela Bourceanu is a senior student at the Faculty of Music in Brașov, where she studies with mezzo-soprano Cristina Soreanu, the latter carefully watching her pupil: "A very nice evening! I expected it because she is a very good student. From the first year she proved to be very diligent and, as you have seen and heard, she has a special musicality. From the fourth year she had become soloist of the Opera in Brașov and the theater is proud to have such a voice and valuabe soprano. "

As I was saying, Mădălina Gabriela Bourceanu proposed a mosaic program, accompanied at the piano by Alexandra Fits, the last being a sensitive and refined musician, instrumentalist with a lot of experience in the genre of chamber music: "I was amazed at the progress achieved in four years. I get along very well with her; in terms of music I understand her very, I understand her intentions. From a musical point of view I think it is a very good match. In order to perform with Mădălina, I sing with her. In my head I also sing and somehow I understand the vibe of the singing and it is as though I am accompanying myself."

Those who found themselves last night at the Small Auditorium of the Romanian Athenaeum have had an interesting journey in the genre of the lied proposed by Mădălina Gabriela Bourceanu, a musical approach built intelligently and with emotion, whose leading thread was love, as the young soprano confessed: "I am honored to be here this evening! And I am very happy at the same time. I thank the public and those who have stood by me. I wished to go through several schools and many styles. "

Why did you want to convey to the public?

"To convey emotion, firstly ... to explain what each lied meant. Love in general. "

Besides the beautiful voice conducted with great sensitivity and intelligence, I noticed a lot of emotion in the singing of soprano Mădălina Gabriela Bourceanu and if she continues to improve herself we will surely hear more about her artistic achievements.