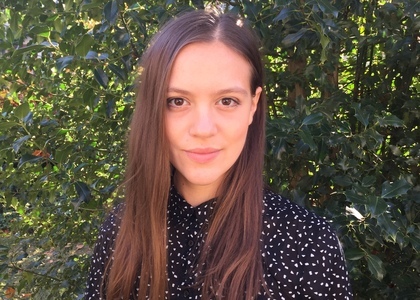 The Tuesday evening show- the 31st of January 2017

Wednesday, 1 February 2017 , ora 15.37
The Tuesday evenings at the Sala mică of the Romanian Athenaeum are more and more often an oasis where music is made with talent, dedication and passion. On the 31st of January, the music fans received enthusiastically the performance of the pianist Laura Chihaia, a student at the Music Academy in Basel. Beside piano, Laura Chihaia also studies the historical improvisations and the pianoforte. Ignoring some syncopes in her performance which had works of Mozzart, Scriabin and Chopin, Laura Chihaia stood out with a really special creativity, with fantasy and total dedication. Laura Chihaia is an intelligent musician who sees the world through sounds :

"At the moment, I'm very busy with Mozzart's music. I found him, so to speak, a couple of years ago, when I started studying with my teacher in Basel and I have the tendency to go to the extremes. I love the classical repertoire- Mozzart, Beethoven- or Skriabin or the Romantical Russians. Somehow, there are three parts in me. Mozzart is very interesting because he seems happy when he's not. Skriabin a very honest...And Chopin is somewhat cheerful with his great Polish Songs."

As for the message she wanted to communicate, the young pianist said:

"The care for the detail...Especially at Mozzart. In my oppinion, there are few nowadays who care so much for the detail and at the same time, all the details being so cizeled."

About the talent of the pianist Laura Chihaia, Verona Maier, her first teacher, spoke fondly, she initiating her in the secrets of the piano :

"For me, this evening is a very precious reencounter. It's almost a secret which I'm glad to share with this evening's protagonist ; it's a very old relationship. The reencounter after so many years with this really special character, with an extraordinary intelligence which makes her so rakish in her performance, with the musical tempo, with the instrument...This intelligence developed out of an amazing courage to make from any musical song a dramaturgy which she very bravely fills with stories she rereads or stories she rerights again beside Skriabin, Mozzart or Chopin."

On the stage of Sala mică of the Romanian Athenaeum, Laura Chihaia has developed a strong character, a bold approach of some works she wanted to offer to the audience from another perspective, extremely personal.