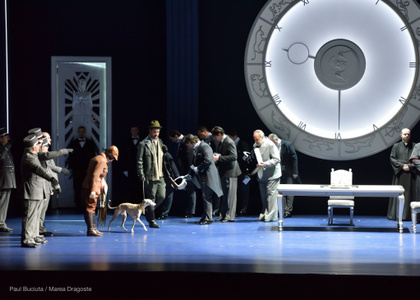 'A Masked Ball' premiere at the National Opera in Bucharest

Monday, 10 April 2017 , ora 15.42
Premieres and events at the Romanian National Opera in Bucharest have been sold out for some time now. That was also the case on April 9th, when the second show (second cast) from the new remake of "A Masked Ball" took place. A Verdi title beloved by music lovers, a title that incites curiosity and brings great expectations. I've met people in the audience, opera-goers and experts that had been present to both shows, on April 8th and 9th, who were thus able to compare the two and offer their oprinions.

"The direction is minimalist; everything is extremely static and the singers basically stand and sing, the choir - as well - enters, sings, exits and that's it...the relations between the characters are very conventional and there's really no need for a director, to direct what is happening on the stage. Honestly, it's minimalistic."

A direction that doesn't bother, in the opinions of musicologist Grigore Constantinescu:

"This show has a good thing. Namely, it navigates through a normal landscape. It doesn't bother you, doesn't offend, lets you understand what Verdi and his playwright wanted to make you understand."

As for the interpretation, we were all delighted with Italian conductor Marcello Mottadelli being involved. The orchestra plays better and better under his wand, has a harmonious sound and precise attacks. We were also delighted with the chorus - prepared by Daniel Jinga - a performance with ample phrases and sharp endings, but this no longer comes as a surprise. There were two casts, with the second, from April 9th - according to the general opinion - coming off easily as superior to the one from April 8th:

"In each cast version I had preferences or some slight complaints. From the first cast I was very impressed with the performance of Petrean. In this second cast I had a student, Bianca Mărgean; she is the most important voice here."

"Tonight's show was miles above yesterday in terms of quality. Valter Borin is an experienced tenor, and most certainly a Verdi tenor. Bianca Mărgean's debut as Amelia was spectacular. It was a very beautiful debut, as was Veronica Anuşca's debut as Oscar. Cătălin Ţoropoc played beautifully as well. And Sorana Negrea...I think she was born for this part."

"The orchestra sounded better during the second show and the singers might be more balanced. The audience demonstrates that it knows how to praise or punish some ways of singing, and this truly gladdens me, because the audience can sometimes be very generous with the wrong people as well."